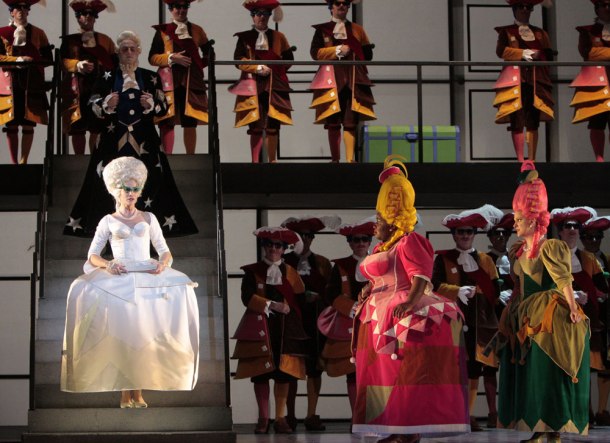 Los Angeles Opera’s latest production of Rossini’s Cinderella (La Cenerentola) which debuted this past Saturday has everything you’d want in a comic opera:  an excellent cast that can sing and act well, a clever production, and a great sense of humor.  The story might not be told exactly the way you know it — the evil step-mother is replaced by a bumbling step-father; a courtly nobleman steps in for the fairy godmother; a pair of sparkly bracelets substitute for too-scandalous-for-the-1800’s glass slippers — but that never gets in the way of making this version one to satisfy all comers, from opera newbies to hard-bitten veterans.

It’s the kind of unabashed fun that doesn’t take itself too seriously, and belies the notion of “opera” as a stuffy institution.  In fact, the way movies like Bring It On payed homage to competitive cheerleading by shining a light on its ridiculous aspects or School of Rock amusingly explained tried-and-true 70’s rock formulas easy enough for 5th graders to head-bang with the best of them, this Cinderella often pokes fun at many traditional opera conventions — big hairdos, overstuffed costumes, grandiloquent gestures —  while simultaneously honoring those same conventions through smart, pinpoint execution of all the essential elements, especially the music.

Leading the way is mezzo-soprano Kate Lindsey in the title role.  Her voice has a smooth, creamy quality that is an absolute pleasure to listen to whether she is spinning long, lyrical lines or nailing the notoriously difficult coloratura Rossini asks of his lead.  She makes a very nice transition from down-trodden housekeeper to regal ballroom presence, injecting a little extra weight and darkness to her voice as she sings at the prince’s ball about her demands for respect (Aretha Franklin, eat your heart out).  Her take on the final aria, “Non più mesta . . . ,” was stunning, and you can’t help but marvel at how much power she still had left in her tank at the end of an entire night’s worth of singing.

Causing Cinderella much grief are her erstwhile adopted family of crazies.  Stacey Tappan and Ronnita Nicole Miller are hilarious as the step-sisters, Clorinda and Tisbe.  With sky-high pink and yellow wigs making them look every bit like Katy Perry and Nicki Minaj in 18th-Century pomp, they play off each other well and have excellent comic timing to go along with solid vocal chops.  Italian bass Alessandro Corbelli plays Don Magnifico, Cinderella’s upwardly-mobile-minded step-father, with just the right combination of buffoonery and desperation.

René Barbera, the 2011 Operalia winner making his LA Opera debut with these performances, is an appealingly earnest Prince Ramiro.  His moderately-weighted tenor suits Rossini well, while having more than enough technique and heft to impress with the tricky “Principe più non se” in Act 2.  Bass-baritone Vito Priante is ideal as a vocally commanding and comically over-the-top Dandini, the prince’s side-kick.  Nicola Ulivieri gives the courtly Alidoro an appropriately mystical quality.

It’s worth mentioning that the entire cast works extremely well together, both vocally and theatrically, regardless of the combination or setting.  The famous Act 2 sextet, in particular, is a pure joy.

Corralling the musical forces was LA Opera Music Director, James Conlon.  He maintained an airiness to the score without sacrificing richness or detail, and he was more than willing to push the pace to the edge of his singer’s comforts without ever out-running them.  The LA Opera Orchestra sounded great under his baton.

For all of the musicians’ skills, the show is veritably stolen by Cinderella’s on-stage rats, perfectly played by a group of supernumeraries dancers and adroitly choreographed by Xevi Dorca.  These do-it-all rats move furniture, act as Cinderella’s footmen, and punctuate scenes with well-timed poses.  The potentially throw-away roles become an integral part of the magic without ever becoming tiresome.  They’ve become so popular, they even have their own Twitter hashtag (#operarats).

Kudos must go out to the rest of the creative team.  Director Joan Font kept the action moving at just the right pace, knowing when to slow things down and give his singers space and when to spice up a scene with more movement and activity.  I was grateful that there were so many funny moments that smartly go beyond mere slapstick.  The candy-colored sets and costumes, designed by Joan Guillén and borrowed from Houston Grand Opera, are the perfect mix of functional and campy, and when combined with Albert Faura’s lighting, set the ideal tone for the entire production.

by Gioachino Rossini.
Libretto by Jacopo Ferretti, based on the fairy tale Cendrillon by Charles Perrault

5 thoughts on “A delicious romp: there is everything to like about LA Opera’s “Cinderella””