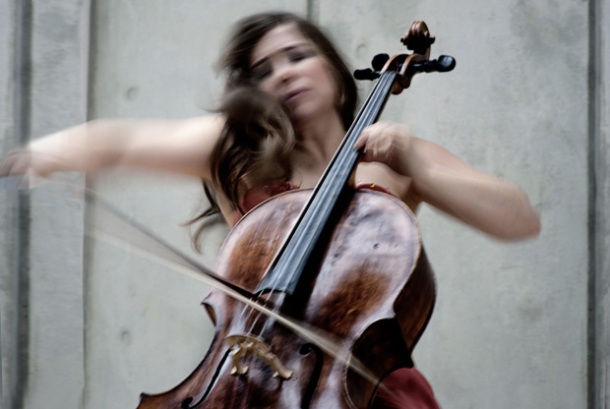 When the Piatigorsky International Cello Festival was in town last year, I managed to catch two of the three concerto performances that different soloists were performing with the Los Angeles Philharmonic.  The one I soloist I missed:  Alisa Weilerstein.  At the time, someone told me I had made a mistake.  Judging by the strength of her recent performance with the Los Angeles Chamber Orchestra, that person was right.  And then some.

For the final orchestral concerts of their 2012/2013 season, LACO and Music Director Jeffrey Kahane invited Ms. Weilerstein to join them for the Shostakovich Cello Concerto.  It was as impressive a performance of any concerto, for cello or otherwise, as I can remember.

She was extroverted but mostly played with her eyes closed, rhapsodic yet spiritual.  Every note was perfectly placed, every phrase perfectly formed.  Whatever she did seemed completely organic, never forced or contrived, as if she was inventing the music on the spot.  The flow of the third movement cadenza to the fourth movement was the perfect slow boil, like the anticipation that builds during a long car ride home in silence with your parents when you were kid — “am I in trouble or not? . . . oh crap, I think I am in trouble . . .” — before you walk through the front door and the butt-kicking finally commences.

The finale was a tour de force of a different kind than I had previously experienced with this concerto.  Mstislav Rostropovich and Lynn Harrell were overpowering, bowling over orchestra and audience alike.  Last year, Mischa Maisky poured it on in waves, making you feel like you were drowning and turning the ending into a cathartic gasp of air.  In contrast, Ms. Weilerstein wasn’t against us, she was with us, somehow lifting the orchestra and audience up and bringing us along for a whirlwind of a ride.

It was masterful, eliciting the kind of excitement rarely seen from the usually staid, leave-right-after-the-last-note Royce Hall audience.  As if that weren’t enough, she sat down and played a gutsy yet restrained account of the Bourrée from Bach’s Cello Suite No. 3 in C.

Before the Shostakovich concerto, Mr. Kahane and his musicians offered up an eclectic mix of music to set the table for Ms. Weilerstein.

Opening the concert was Within Her Arms by Anna Clyne, a work premiered in 2009 by Esa-Pekka Salonen as part of his final “Green Umbrella” program with the LA Phil.  It is an undulating piece for 15 string players, each one playing an individual part.  The resulting textures are complex but tonal, and Ms. Clyne deftly creates a soundscape that is restless yet ultimately calming.  The LACO strings gave it a beautifully transparent performance.

Following that was a rather unconventional bassoon concerto by Hugo Gonzalez-Pioli, a USC Thornton School of Music graduate. The new work, written as a film score to Robert Florey’s 1927 short film, The Love of Zero, was receiving its US Premiere with this weekend’s concerts.

The film depicts the exploits of Zero, a trombone-playing Salvador Dali look-alike; as Mr. Kahane accurately summarized, it is a romantic comedy that evolves into a horror film.  The expressionistic style with its off-kilter landscape and heavy use of shadows, is reminiscent of The Cabinet of Dr. Caligari, with an extra surrealist bent.  Mr. Gonzalez-Pioli’s new score is written in a quirky, retro-ish style with jazzy sensibilities.  Its most clever aspect was the use of solo bassoon lines, particularly whenever Zero played his trombone, adding to the playful, disjointed feeling of the whole experience.  Kenneth Munday, LACO’s Principal Bassoon, played the solo part with smooth expressivity.

Coming back after intermission, Mr. Kahane conducted a spirited account of Beethoven’s Coriolan Overture — an odd place for it (at least on paper) but in practice, the familiar, brooding Beethoven helped clear the mind of the weirdness of the film that preceded it, paving the way for Ms. Weilerstein’s triumph which ended the concert and the season.