When last we saw Rodrigo Sanchez and Gabriela Quintero — AKA Rodrigo y Gabriela — at the Hollywood Bowl, it was for their 2011 debut at the legendary amphitheater when they played two nights backed up by the full forces of the Los Angeles Philharmonic. Between then and now, they appeared locally at smaller venues to support their last studio album, Area 52, bringing along a Cuban jazz ensemble led by pianist Al Wilson

Their triumphant return to the Bowl was a much purer experience — only one night, only the two of them on the stage for almost their entire appearance.

You might think that they’d be swallowed up by the vast stage and the grand setting.  Instead, they seemed liberated, no longer being hemmed in by others or having to riff off of anyone but each other.  Both guitarists worked the Bowl stage like it was old hat, sometimes treating it intimately like a nightclub, other times spreading across its expanse and egging on the packed amphitheater crowd like 1970’s rock stars on a stadium tour.

As Mr. Sanchez colorfully explained to the crowd, this appearance gave them an opportunity to play some favorites off their first two studio albums (their 2006 eponymous debut and the 2009 release, 11:11) plus try out on a live audience some new songs planned for their next studio album.  After the duo played a brief introduction while sitting on the front edge of the Bowl stage, they jumped up to play the as-of-yet unreleased “Mega I” before eventually playing an aggressive rendition of “Hanuman.”

The rest of their 75+ minute set followed a similar pattern.  Fans of their first two albums will almost certainly enjoy the new works too.  Each features the thrash-metal-inspired-flamenco formula which has made Rod y Gab so popular:  Ms. Quintero providing the rhythmic foundation, her facial demeanor alternating between deep introspection and an infectious smile, while Mr. Sanchez takes a stereotypical power-rock stance while plucking and strumming the lead.  As with their previous visit to the Bowl, each took extended solo turns to the delight and appreciation of the crowd.

As the night progressed, so did the scale of their production.   Whereas simple spotlights and static projections on the scrim behind them provided the initial decor, this was soon supplanted by live images of the duo playing guitar while lights danced across the semi-circular arches above them.  Eventually, the live projections expanded onto the entire Bowl shell.

And as the production effects grew, so did the audience involvement, with the almost all in attendance on their feet dancing, clapping along, and rocking out long before the night was done.  Rod’s solo about three-quarters of the way through their set transitioned smoothly into the climax of the evening, with Mr. Wilson making a brief appearance on keyboards for a Caribbean-tinged version of “Santo Domingo.”  They finished out their regular set with a typically show-stopping rendition of “Diablo Rojo,” sending the nearly 18,000 in attendance into a frenzy.

After the shortest of breaks, the pair returned to the stage — sans shirt for Mr. Sanchez, much to the delight of the women in the crowd — for an encore:  a compelling new work, “Vaquero,” followed by “Tamacun” off their first album.  The crowd begged for the music to continue, but the duo said their thanks, waved goodbye, and left everyone wanting more.

Preceding Rodrigo y Gabriela on stage were two acts who, like the Mexican guitarists, had hybrid musical sensibilities but manifested in different ways.

The more well-known of the two was DeVotchKa,  who had gained some notoriety after their music was included in the Oscar-nominated film, Little Miss Sunshine, in the process also earning themselves a Grammy nod for their contributions to the soundtrack.

The Colorado-based group brought a genuinely eclectic mix of styles to the proceedings, varying from Mariachi-tinged brass sounds to the string-instrument arrangements that one might expect from the self-proclaimed “little gypsy wedding band.”  Nick Urata, the group’s multi-talented lead singer/guitarist/theramanist/bouzoukist (or is it more properly “bouzouki-ist?”), sang with passion and urgency, his voice reminding me more than a little bit of Brandon Flowers from The Killers. Among the rest of the band, you couldn’t help but notice and be impressed by Jeanie Schroder adding backing vocals while doubling on stand-up bass and sousaphone, all while in a skirt and heels.  An appreciative crowd repeatedly gave them strong ovations during their entire set.

Opening the concert was Lord Huron, an indy/folk rock group led by Ben Schneider.  A native Michigander who has had stints in Paris, New York, and Los Angeles, he began performing as a solo artist before being joined by others to form the band in its current incarnation.

Mr. Schneider mixes a little drumming in with his vocals and guitar playing, like many other lead singers in more prominent bands (Marcus Mumford of Mumford & Sons and Dan Reynolds of Imagine Dragons are two that most immediately spring to mind).  He led a six-song set that was straight-forward and earnest, without any musical tricks or gimmicks.  Despite taking the stage more than two hours before the headlining act, they were greeted by a mostly full house who gave them a very warm reception, especially for the songs in the middle of their set:  “The Man Who Lives Forever,” “We Went Wild,” and “She Lit a Fire.”

The three acts formed a diverse but cohesive whole.  Kudos to the folks at the LA Phil and KCRW for inviting two interesting bands to support the terrific headliner.

I look forward to seeing Rodrigo y Gabriela again.  You should too — and if you’re lucky, you won’t have to wait very long:  their July 28th concert at Red Rocks, the only natural amphitheater that can arguably rival the Hollywood Bowl in fame and prestige, will be broadcast LIVE care of the good folks of AXS TV (click HERE for more info or check your local listings for details). 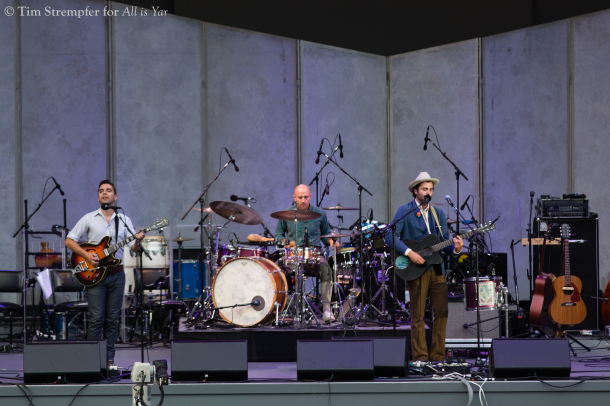 DeVotchKa (with The Section Quartet)

Photo credits:  Tim Strempfer exclusively for All is Yar