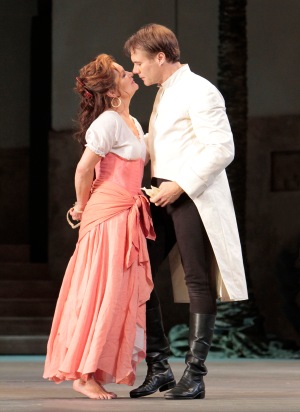 The mood at Los Angeles Opera leading up to the beginning of this new season has been thoroughly buoyant, the result of a confluence of good news:

Taken together, all of these things re-affirmed what the LAO leadership has been saying for a while — that the company’s troubles are behind them and that from here on out, things are going to be better.  And so, for their opening production of this increasingly auspicious season, the company trotted out . . . (drumroll please) . . . Carmen.

This may not get hardcore opera purists excited, but when you’re rolling out an uncommon work such as Streetcar or Einstein or Massenet’s Thaïs, you’ve got to make sure to mix a few crowd-pleasers into the season to ensure some packed houses.  Carmen reliably makes the accountants happy, regardless of whether you think that it’s over-played or not played enough.

Sure enough, this particular run has been selling well, and the house on opening night last Saturday was packed. Those in attendance were treated to a cast of singers in excellent voice, placed in a  production that was frustratingly uneven visually and overly-simplistic dramatically.  The ultimate result was an opera that was easy to enjoy, but tough for me to love. 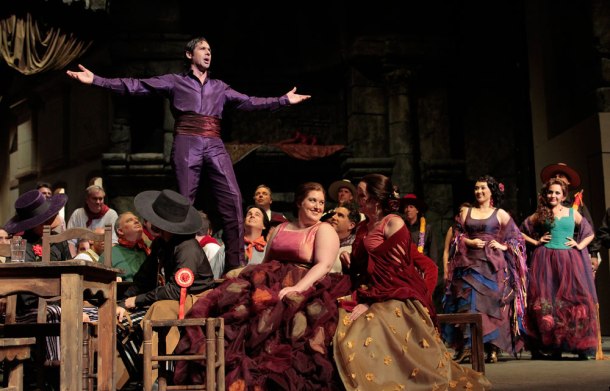 At first blush, there is much that would satisfy most anyone.  Big, dramatic sets?  Yup, this is one of the biggest and deepest to occupy the Dorothy Chandler Pavilion stage.  Spectacle?  Sure, care of a large cast of LA Opera chorus members, a charming troupe from the LA Children’s Chorus, and dancers doing flamenco-ish steps.  A strong musical backbone?  Definitely, with Maestro Domingo leading the proceedings with perfect pacing and balance,  drawing out some lovely playing from the LA Opera orchestra in the process.

Beyond that, whether or not this production is one you’d love depends on what you’re looking for in a warhorse such as Carmen.  Let’s start with the cast, full of first-rate voices but hampered somewhat by one-dimensional portrayals.

Patricia Bardon played the title role on opening night as she will for all but one of the performances.  The Irish mezzo-soprano has an attractive, dusky, quality to her voice that she uses with the right amount of sultriness and flair.  It isn’t huge, but it’s big enough to stand out among the other singers with ample reserve that she can call on when needed.  She played the part with swagger and confidence, owning the stage as much by her attitude and posture as by her singing.  From her entrance in the famous Habanera through to her tragic demise at the end of the opera, Bardon’s Carmen is shamelessly fickle and callous, tossing around the word “amour” like it’s a dirty dish rag rather than anything to be taken seriously.

It works, but if you prefer your Carmen to also display some sensuality, let alone any overt sexuality or eroticism, you’d be very disappointed.  In this portrayal, she is more of a tease than a temptress; whether that’s her choice or the director’s, I can’t be sure.   Her “seduction” of  Don José is downright puritanical.  The one or two times hints of bare leg flash from beneath her skirt, you’d think it was an accident.  She barely bats her eyelashes at him, yet he becomes and remains enraptured by her, as if in a perpetual state of willful disbelief.  (Dude, she’s just not that into you!)

Speaking of Don José, Brandon Jovanovich is convincing as Carmen’s hapless boy-toy.  You may not understand how or why he falls for her, but when he does, it’s easy to believe that he is slowly going down the emotional drain.  He is an undeniable presence, with an imposing stature, impressive subtlety in his acting, and an even more impressive voice.  José’s increasing melancholy, frustration and rage comes through in his voice without the vocal lines ever becoming misshapen.  During the famous Flower Song (“La fleur que tu m’avais jetée”), he floated the tender lines with grace, but he was easily at his best during the moments filled with anguish, like this gem:

Was it an ideal portrayal?  No.  The perfect Don José would have a great voice AND make you believe he lost his brains for Carmen for some reason other than her saucy reputation, though I think he was a bit hamstrung by Carmen’s relative tameness.  And as impressive as his singing may be, the final “je t’aime” of the Flower Song doesn’t bring you to tears the way Domingo in his hey-dey might have.  Granted, that’s a tough standard to match, but not an unreasonable one when the guy waving the baton in the pit is the standard by which all Don Josés get measured.  That said, I think Mr. Jovanovich is still the best tenor in the core repertoire plying his trade today, and if there’s a better one, someone please tell me who it is.

Italian bass-baritone Ildebrando D’Arcangelo, has become a frequent visitor to Los Angeles lately (thank goodness for that), and he returned to the Dorothy Chandler Pavilion stage as the bullfighter, Escamillo.  He looks and sounds straight out of Hollywood central casting, especially for a role such as this.  He wasn’t asked to do much with the role, but what little he did, worked:  when he looks at a woman and causes her to swoon, you aren’t surprised; when he whips out a knife after being challenged, he does it with a sly “bring it on” demeanor.  His voice is always dark and resonant, and while it doesn’t over-power, neither does it ever get swallowed up.

Playing the saintly Micaëla is Pretty Yende in her company debut.  The South African soprano is a 2011 first-prize winner of Maestro Domingo’s “Operalia” competition, and she acquitted herself well.  Her Micaëla is all innocence and naiveté, both in how she sang and carried herself.  Her voice soared with elegance and brightness, and her big Act 3 aria, “Je dis que rien ne m’épouvante,” elicited the biggest ovation of the evening.  Yes, her wardrobe looked completely out of place in that entire act’s mountain setting (what looked to be 2-3 inch heels and 20 lbs and multiple layers of overcoat), but blame costume designer Jesus del Pozo for that.

Among the singers in minor roles, soprano Hae Ji Chang (a member of the company’s Young Artist Program)  in her LA Opera debut stood out above her colleagues with a lovely soubrette voice as Frasquita; keep a look out for her in future roles.  In Act 2, she teamed up with Ms. Bardon, Cassandra Zoé Velasco (Mercedes), Keith Jameson (El Remendado), and Museop Kim (El Dancairo), for a scheming quintet that made for the most genuinely charming and amusing moment in the entire opera.

If there is blame to be assigned for what to me was less-than-satisfying stagecraft, it lands squarely on the shoulders of stage director Trevore Ross.  A member of LA Opera’s assistant directing staff, these performances of Carmen mark his company debut in the top job.

Some people feel that a director’s approach to a classic like this is to stay out of its way and do no harm.  Perhaps, then, Mr. Ross was playing it safe.  It’s a shame because the scenes that worked best were the ones that were unabashedly full of dramatic tension (the Act 4 final confrontation between Carmen and Don José) or unafraid to be funny (the aforementioned Act 2 quintet); however, his approach more often seemed to be one of avoiding risks, with scenes often falling into that netherworld between serious and silly.  The worst of these were ensemble numbers in Act 1 (the argument between the cigarette girls, and the final scene when Carmen escapes) which looked awkward, almost cartoonish.

The massive sets, originally from the Teatro Real, Madrid, while mostly attractive and functional, suffered from a different kind of problem:  their sheer size and depth draws you in, as if inviting you to revel in the nuances; however, your eyes are soon drawn to the parts that, for no apparent reason, are completely plain.  The most egregious examples were towers that were used in Lillas Pastia’s inn (Act 2) and the smuggler’s mountain resting spot (Act 3):  there is a small section near the top cut out to show what looked to be a stacks of rocks, but mostly they are flat, straight-sided and painted a dull grey.  At best, they looked out-of-place; at worst, they looked like the artisans ran out of time constructing the set; either way, it wasn’t good.

The net result is an experience that is pleasant at the surface, but rarely approaches anything close to theatrical depth.  If you’ve never seen Carmen before, if the most important thing to you in an opera are the musical qualities, or if you were just looking to be entertained, this isn’t a problem whatsoever.  If instead you’re an opera veteran or someone who demands genuine artistry in places beyond the singing, you’re not likely to find what you’re looking for here.

As for me . . . there were excellent voices singing timeless, hum-along classics.  I was hoping for more, but I’ll take what I got. 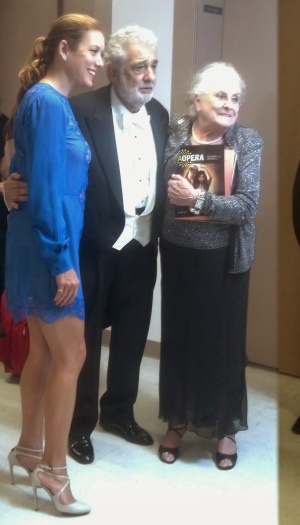 “Production made possible by generous gifts from The Milan Panic Family
and
The Alfred and Claude Mann Fund, in honor of Plácido Domingo.” 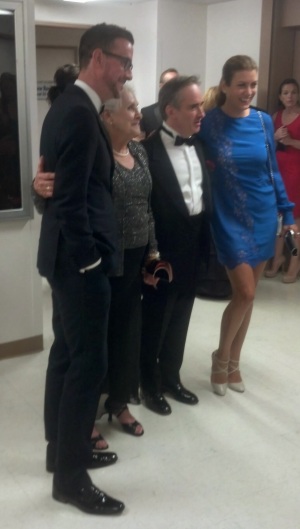 by Georges Bizet
Libretto by Henri Meilhac and Ludovic Halévy, based on a novella of the same title by Prosper Mérimée