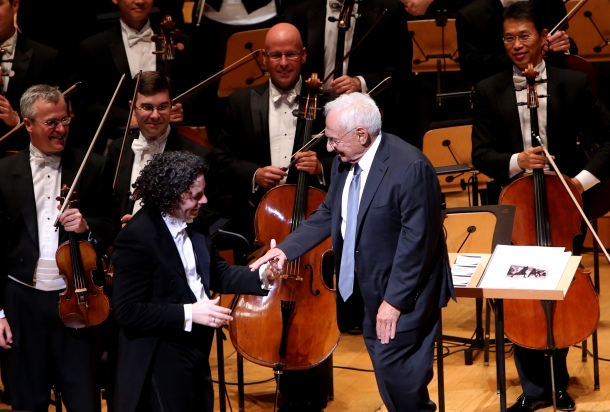 The names on the program — Gustavo Dudamel, Yo-Yo Ma — were impressive, the kind that transcend classical music into the popular consciousness.   The musical offering — Cage, Bach, Tchaikovsky, Adès, Mahler, Saint-Saëns — was noteworthy, both for its eclecticism and its ability to offer a diverse showcase for the Los Angeles Philharmonic and Walt Disney Concert Hall.

Ah yes, the hall.  Monday night’s season opening concert & gala, combined with the first few weeks of regular season programming, was being billed as the “10th ANNIVERSARY CELEBRAT10N” of the opening of the now-iconic venue  (fun with fonts, included). An honorable and auspicious event, worthy of being the center of attention to be sure; however, that’s not actually how the evening played out.

Instead, big name conductor and soloist, news-making gala programming, and even the magnificent building itself, took a back seat to someone not even listed on the bill:  Frank Gehry.

Yes, celebs walked the red carpet and civic power-brokers hobnobbed over glasses of bubbly.   Yes, great music was played with panache.  Yes, the legend was told of how a landmark philanthropic gift from a famous family evolved from dream to an embarrassing empty pedestal of a parking garage to, finally, a building that has become transformative for the orchestra and the city.  All well and good, but ultimately secondary. 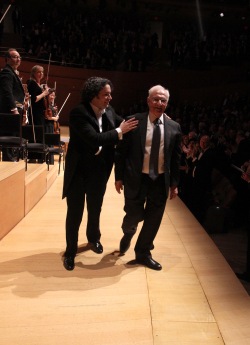 At its core, the evening was an unabashed paean to Mr. Gehry, former de-constructivist chain-link fence wielding local bad-boy transformed into global starchitect.   Quotes by him were projected onto the various walls of the lobby.    His voice boomed into the hall to introduce each piece of music, allegorically narrating the concert with his perspective of each phase of the hall’s development.  When the inevitable evening-ending ovation came, it was directed primarily to him:  the star soloist didn’t re-appear; the conductor and orchestra took their final bows after him; acoustician Yasuhisa Toyota (who some feel is as important, if not more so, in WDCH’s success) was never even credited save for a brief mention from the stage, and despite being implored by Messrs. Gehry and Dudamel, could not be coaxed onto the stage to share in the adulation.

Mr. Gehry took it all in stride, with a humble, almost sheepish, demeanor, but he never flinched.  This was his night, he knew it, and that was perfectly fine.

That said, this was still a concert, with the music serving demonstrative, narrative, and artistic purposes:

First of all, it showed off the outstanding acoustical qualities of Walt Disney Concert Hall in diverse repertoire, ranging from the literal silence of Cage’s 4’33” to the monumental grandeur of the finale from Saint-Saëns’s Organ Symphony.  Loud or soft, one instrument, massive orchestra, booming pipe organ, it didn’t matter:  the hall could handle it all.

I’ll even go one step further — no matter the size or make-up of the ensemble, no matter how delicate or clangorous the notes coming from the stage, you could be convinced that the hall was purpose-built for that specific scenario.  That, ultimately, is the genius of both Mr. Gehry & Mr. Toyota:  they have created a space that aurally and visually matches, nurtures, and enhances whatever is being created on stage. 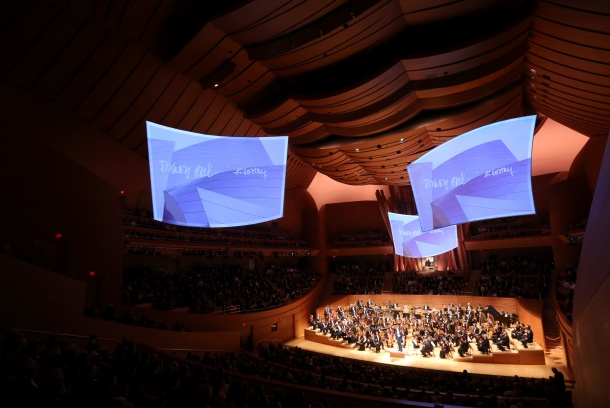 Secondly, the music itself was used in the storytelling.  The Prelude to Bach’s Cello Suite No. 3 was a conscious nod to the fact that Principal Concertaster Martin Chalifour, hard-hat and all, baptized the building mid-construction with the sounds of Bach from his Stradivarius.

The music also partnered with Netia Jone’s videographic artistry, bringing to life the emotional and intellectual complexities and rewards.  The program was divided up into sections, each with its own title, pre-performance anecdote from the architect, and musical nugget:

It was entertaining and informative, but for all of the simile and symbolism linking music to the building, music is the building’s literal raison d’être.  Without it, there’d be no swoops of stainless steel or deeply resonant panels of wood, no eye-popping  green/orange/purple & red/blue floral seating or Delft-china-mosaic floral fountain.  And on this night, the program itself may have been limited in duration but the music making was uniformly excellent.

The LA Phil has trained its regular audiences to be among the most savvy orchestra attendees anywhere, and even this gala  crowd showed its “new music” chops.  Despite speculation to the contrary, Cage’s 4’33” went off without any laughing or giggling, not to mention a stunningly infrequent amount of coughing, whispering, or other audience-related contribution to the performance.  The crowd was ready for it, and were steely in their resolve to minimize their sound.  Almost certainly contributing to their hold-your-breath attitude was the disposition of the musicians on stage. 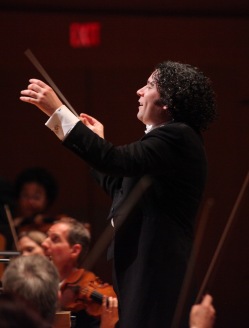 At Mr. Dudamel’s cue, most of the musicians acted like they were about to play:  violinists and violists placed instruments under chins with bows at the ready, wind players brought their instruments to their mouths with embouchures prepared, etc.  Even Yo-Yo Ma, in his soloist’s spot next to the conductor’s podium, brought his bow up to his strings and a thoughtful expression to his face.

Whether or not this makes for a “good” performance of 4’33” depends on your point of view.  Some would say an uptight audience is not what Cage had in mind.  Others might think it a contest, with audience members “winning” if they can make it through without creating any kind of audible actions.  Still others would be dismissive of the whole idea that a stage full of musicians almost-but-not-quite playing their instruments being “music.”  Personally, I wouldn’t classify it as a “musical” experience at all, but I found it to be a fascinating experience nonetheless.  It certainly was “easier” than I thought it would be to sit still and take it all in, and it effectively demonstrated the sensitivity of the hall.   It also demonstrated the Pavlovian reflexes of this particular audience to the conductor’s cue:  when Mr. Dudamel would drop his arms to indicate the end of a movement, many in the crowd decided it was now acceptable to cough; when he would raise his arms again before the first downbeat of a new movement, you could sense throats closing and sphincters tightening.  It’d be interesting to see how a different audience — one that was less prepared, more devil-may-care — would affect the experience.  No rush, though.

Mr. Ma was the requisite superstar soloist for the evening.  He performed at the second of three inaugural concerts ten years ago, but his visits to Walt Disney Concert Hall have been rather sparse since then, especially in repertoire with an orchestra.  It was good to have him back.  His playing on this night was filled with a relaxed elegance, and the audience’s reaction to it was as far removed as one could get from the tension palpable in the Cage.  His Bach was pointed yet fluid; his Tchaikovsky was genial, graceful, and even a tad deferential, turning the Rococo variations into chamber music writ large.   Mr. Dudamel and orchestra matched him perfectly. 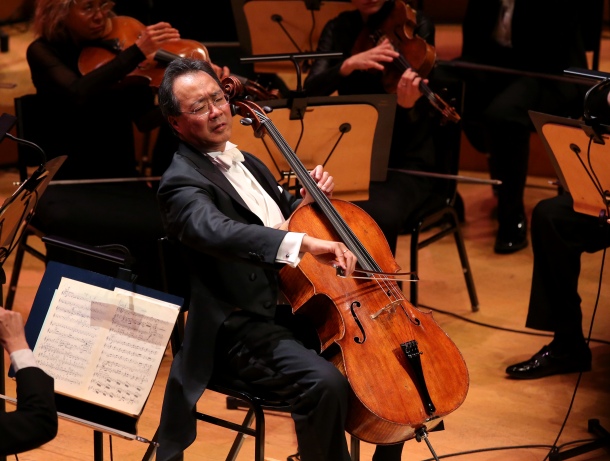 The LA Phil then showed off their contemporary music chops again, tossing out Adès’s These Premises are Alarmed as if it were something they played all the time (they don’t).  Angular rhythms and complex harmonies shone through, and their cohesiveness was quite remarkable for what was certainly limited rehearsal time.  When the abrupt ending came, I was disappointed and wanted to hear more of it.  The composer managed to pack a lot into a very small package, and received a nice on-stage ovation for his efforts.

Mahler is something this orchestra and this conductor do regularly, and their performance of the Mahler 9th’s third movement was the highlight of the evening.  It was powerful and intense, with Mr. Dudamel never letting balances get too thick.  In particular, Principal Trumpet Tom Hooten soared, from the piercing opening motif to the more lyrical lines later in the movement.

The finale of the Saint-Saëns Organ Symphony allowed the performers to figuratively “turn it up to eleven.” With keyboardist Joanne Pearce Martin at the helm, the massive instrument thundered to maximum effect; if one didn’t appreciate Disney Hall’s impressive bass response before this, you couldn’t avoid feeling it rumble through your body, yet even during the rousing climax with organ and orchestra at full-bore, the sound never became muddy or overblown.   Mr. Dudamel and the LA Phil gave a persuasive and joyous account of this less-than-profound music. 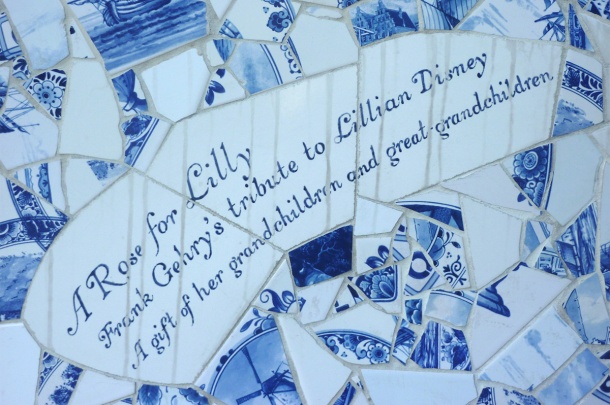 After Mr. Dudamel, the orchestra, and Mr. Gehry took their end of concert ovation, the orchestra played “When You Wish Upon a Star” and dedicated it to Walt and Lilian Disney and their family.  It was an undeniably sentimental gesture, played with an appropriate tenderness and lushness that Mr. Dudamel managed to avoid allowing to turn schlocky.    Star-shaped confetti rained down upon the audience.  Some audience members reached for stars almost as if they were trying to snag a Dodger Stadium foul ball; thankfully, no one got hurt.  Smiles abounded.

It was an excellent night.  Bring on the new season. 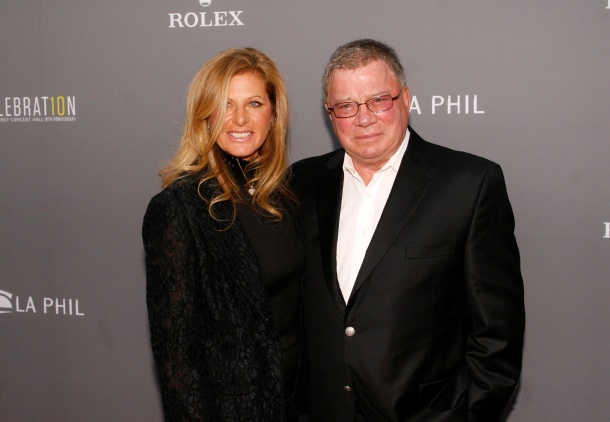