It’s quite been quite a week for Southern California opera fans:

Due to an unusually busy schedule, I was only able to make it to one of these events:  this past Sunday’s Cosi at WDCH (my review, plus some photos, coming soon). 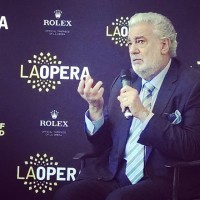 Fortunately for me, LA Opera invited a few people over to the Dorothy Chandler Pavilion on May 15 to join Christopher Koelsch (LA Opera’s President and CEO) as he led a discussion with Ms. Fleming and Mr. Domingo.  It was the first time these two opera superstars sat down together for any kind of public conversation, though you wouldn’t have known it given how easy-going their banter was. Mr. Koelsch did a nice job prompting them with a relatively short list of topics, but mostly he stayed out of their way as the two singers traded insights and stories.

I also had a chance to briefly chat one-on-one with each of them.

“Well, you know, it is [something I’ve considered].  What is missing is time.  My life is the stage, in a way.  To do concerts — to do the Winterreise or something like that — takes a lot, a lot, a lot, a lot, A LOT of time to prepare, and the stage doesn’t lend me that luxury.  Perhaps one day, let’s say — and I’m not looking forward [to it] — that being on stage is very tiring because it takes hours and hours to rehearse . . . if they say, ‘Okay, Plácido, maybe physically it’s too much for him, but he can sing these other things,’ then maybe I’d do it.  But as long as I can live on the stage, and I can represent these characters, I will continue with them.” 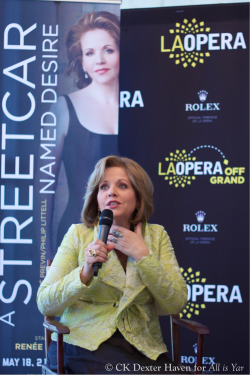 Similarly, I asked Ms. Fleming what dramatic soprano — and even mezzo-soprano — parts she would sing if she could, especially given.  Her reply:

“Gosh, there are more heavier soprano roles that I’d love to sing like the Tosca, the Norma, the Butterfly, those things that we all love so much.  The mezzo repertoire, I haven’t really thought about it much because I’m so busy doing what I do.”

We chatted about it a little more, and I reminded her about the very credible recording of “He shall feed His flock” and “Come unto Him,” the back-to-back airs from Handel’s Messiah which are normally sung by a mezzo-soprano and soprano, respectively.  Separately, she said:

“You know, I’d sing anything I could — I’d sing baritone roles if I could.  It’s interesting, the voice changing happens to some people . . .  and in my case, my voice has not really changed.  So it’s not given me the opportunity to sing other repertoire, so I’m sticking with Strauss, for example.”

My photos from that day are below, along with two videos I took from the open discussion:  the first is of Mr. Domingo talking about singing baritone roles and conducting, the second is of Ms. Fleming talking about her role as Creative Consultant for Lyric Opera of Chicago.

—————
Photo and video credits: CK Dexter Haven exclusively for All is Yar

3 thoughts on “My chat with Plácido Domingo about singing Schubert lieder, plus Renée Fleming ponders singing baritone too”