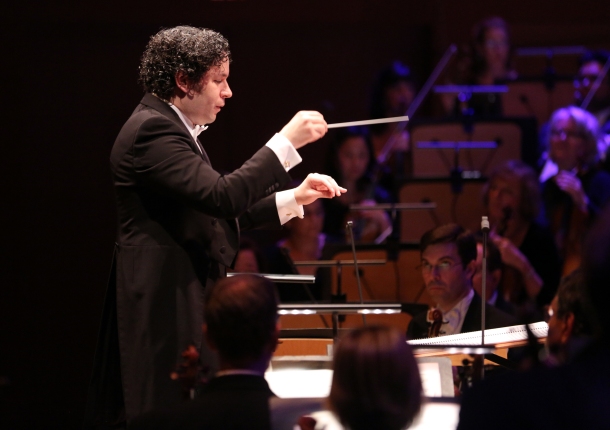 Gustavo Dudamel’s final Walt Disney Concert Hall appearance of 2014 was all about himself, the Los Angeles Philharmonic, and what they could do together.  The program featured three orchestral showpieces laden with built-in imagery for him to exploit.   No daintiness was required. No soloists got in the way.   A good time was had by all.

The concert opened with Helix by Esa-Pekka Salonen, an overture-like piece that the former Music Director describes as “basically [a] nine-minute accelerando.”  Sure enough, it twists and turns around a central theme before abruptly ending, much like a doomed spaceship spiraling its way ever faster towards a black hole before disappearing in a flash.  Mr. Dudamel has a penchant for conducting the works of his predecessor in straight-forward fashion, focusing on drive and momentum and letting the intricacies come through on their own.  To that end, Helix is better suited to this approach than Mr. Salonen’s more nuanced pieces (like, say, L.A. Variations), and the orchestra came through for him with an athletic performance, zigging and zagging with seeming ease.

Rachmaninoff’s Isle of the Dead was up next, offering a change of  mood.  Inspired by a monochrome reproduction of Arnold Böcklin’s fifth painting of the same name, the tone poem is Rachmaninoff at some of his most brooding. Mr. Dudamel’s approach here was the opposite of the previous piece, playing with textures and letting the pace proceed naturally.  To that end, he took his time with it, letting the underlying 5/8 rhythm breathe in purposefully labored fashion at first before allowing the work’s sunnier moments to shine.  The orchestra responded accordingly, shifting from darker timbres to brighter ones before ending in a suitably dusky tone.

Pictures at an Exhibition in the Ravel orchestration rounded out the evening.  Mussorgsky’s iconic work is certainly familiar, with Disney Hall audiences hearing the Ravel version in April of 2013 (an exceptionally bright reading by David Robertson) and Hollywood Bowl patrons getting to experience the rarer and wackier Stokowski arrangement this past summer (with Stéphane Denève at the helm).  Mr. Dudamel, however, has a habit of making familiar works sound fresh, and with these concerts being the first time he led the LA Phil through this warhorse, you sensed it was going to be an event.

It was that and then some.

Conductor and orchestra were in their element together, bold yet always musical.  In a year when 4k Ultra High-Definition TVs have become mainstream, Mr. Dudamel’s meticulously detailed account seemed appropriate.  He applied maximum contrast to these Pictures:  tempos ranged from trudgingly slow to frighteningly quick and everything in between; dynamics started at a comfortable mezzo-forte before widening in breadth until the startling shift from the blaze of the brass in “Catacombs” one moment gave way to the whisper of violins and woodwinds of “Cum mortuis in lingua mortua” the next.  Granted, there were occasions that felt micro-managed — an exaggerated ritardando in the middle of “Bydło”  and some halting portions of “The Great Gate of Kiev” being the most notable — but the overall shape was expertly crafted and finely honed.

The LA Phil was at its virtuoso best, the brass sounding particularly burnished and strings playing with noticeable bite. Principal Trumpet Tom Hooten was typically commanding, his work in the benchmark solos of the opening “Promenade” and “Samuel Goldenberg & Schmuyle” sounding particularly impressive. James Rotter (alto saxophone) and Whitney Crockett (bassoon) played fine solos of their own in “Il vecchio castello,” as did Jim Miller (tenor tuba) in “Bydło.”

Mr. Dudamel’s next appearance at WDCH won’t be until early March when he and the orchestra prepare the programs that they will take on their Spring tour of Asia.  A different guest conductor will be on the LA Phil’s podium every week until then.

Salonen:  Helix
Rachmaninoff:  The Isle of the Dead, Op. 29
Mussorgsky:  Pictures at an Exhibition (orch. Ravel)