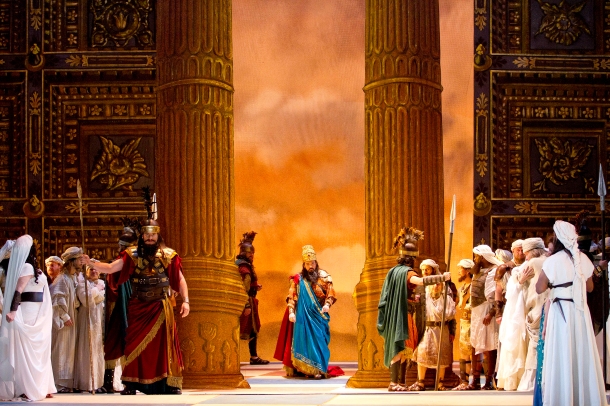 The other shoe has dropped.  Having already mentioned that Gluck’s Orpheus and Eurydice will be on the 2017/18 season docket, Los Angeles Opera announced the rest of next season’s schedule earlier this evening.

The full press release is below.

Five of the season’s six mainstage productions are new to LA Opera, including two company premieres; other highlights include a gala
celebration of Plácido Domingo’s 50 years in Los Angeles

(Los Angeles) January 23, 2017 –  General Director Plácido Domingo has announced the repertory and artist roster for the company’s 2017/18 season. Planned by Mr. Domingo in collaboration with Music Director James Conlon and President and CEO Christopher Koelsch, the season will include six mainstage productions presented at the Dorothy Chandler Pavilion, and additional performances presented in four different venues through the company’s Off Grand initiative. The company will also present two concerts at the Dorothy Chandler Pavilion, including a gala celebration marking the 50th anniversary of Mr. Domingo’s first performance in Los Angeles.

“Many of the world’s most gifted and most important artists converge in Los Angeles to bring the magic of opera to our community,” said Mr. Domingo, who will sing the title role of Nabucco and conduct performances of The Pearl Fishers during the season. “The 2017/18 season emphasizes the new. Five of the season’s six mainstage productions will be completely new to Los Angeles, and two of those will be company premieres. We will see a number of major house debuts by world-class talents, including two truly legendary artists: director-choreographer John Neumeier and baritone Leo Nucci. Furthermore, our Off Grand season introduces no less than five contemporary works in their company premieres. Put together, all of these groundbreaking performances showcase the transformative power of opera and the incredible variety of operatic expression.”

“With so many wonderful events surrounding my tenth anniversary at LA Opera, it would seem difficult to surpass the remaining months of our current season,” said Mr. Conlon. “But as I look ahead to the 2017/18 season, I am happy that we will continue to revive significant works that have been long absent from our stage. In all, I will conduct four mainstage productions of operas that I have never previously led at LA Opera. I am particularly proud to collaborate with Plácido Domingo for our fifth Verdi opera together here, Nabucco, which has not been seen in Los Angeles since 2002. Gluck’s Orpheus and Eurydice returns to our repertory for the first time since 2003, when it was performed in the original Italian, but this time I will conduct the company premiere of the composer’s subsequent French adaptation. The season opens with Bizet’s Carmen, which, astonishingly, I will conduct for the first time in more than 20 years. I also look forward to celebrating the centenary of Leonard Bernstein’s birth with the company premiere of Candide. Most of all, I look forward to making music with our orchestra, chorus and staff, who are the musical backbone of LA Opera.”

Complete casting and additional information can be found at LAOpera.org or by clicking on the titles below for more details.

In just over three decades of existence, LA Opera has become one of America’s most exciting and ambitious opera companies, dedicated to staging imaginative new productions, world premiere commissions and inventive stagings of the classics that preserve the foundational works while making them feel fresh and compelling. The company also explores unusual repertoire and new works through the Off Grand initiative, performed in a variety of venues throughout Los Angeles. As a non-profit organization, LA Opera depends on philanthropic support to ensure that opera thrives in Los Angeles for generations to come. Sharing the arts is part of the company’s civic responsibility, and LA Opera deepens community involvement with this rich art form through many wide-ranging initiatives.

Rigoletto (May 12–June 3, 2018) — Giuseppe Verdi
Artist in Residence Matthew Aucoin conducts a revival of Mark Lamos’s striking production, headlined by two extraordinary Italian baritones. From May 12 through 19, the legendary Leo Nucci makes his company debut as Rigoletto, with Lisette Oropesa as Gilda and Arturo Chacón-Cruz as the Duke of Mantua. From May 27 through June 3, charismatic powerhouse Ambrogio Maestri takes over the title role, with Irina Lungu and Michael Fabiano making their company debuts as Gilda and the Duke.

Plácido Domingo 50th Anniversary Concert (Nov 17, 2017)
On November 17, 1967, a young singer on tour with the New York City Opera took to the stage of the new Dorothy Chandler Pavilion. In the subsequent five decades, Plácido Domingo has made a profound impact on the cultural life of Los Angeles—as a singer, conductor and champion of the arts. Fifty years to the day since that remarkable debut, Plácido Domingo headlines a gala concert, joined by a legion of special guest artists and James Conlon conducting the LA Opera Orchestra, in a musical celebration of Domingo’s incomparable artistic legacy.
Audra McDonald in Concert (May 20, 2018)
Unparalleled in the breadth and versatility of her artistry as both a singer and an actress, Audra McDonald—winner of an Emmy Award, two Grammy Awards and a record-setting six Tony Awards—returns to Los Angeles in concert with the LA Opera Orchestra.

La Belle et la Bête (Oct 28–31, 2017; company premiere) — Philip Glass
Jean Cocteau’s cinematic masterpiece is recast with an enchanting soundtrack by composer Philip Glass, who replaced the film’s original music and dialogue with nothing less than a classical opera. As the film plays on the screen, a quartet of vocal soloists perform live in synchronization with the film actors, as Michael Riesman conducts the Philip Glass Ensemble.

A Gordon Getty Double Bill (June 22-24, 2018)
The Canterville Ghost (west coast premiere) —  Gordon Getty
Usher House (company premiere) — Gordon Getty
A ghostly double bill begins with The Canterville Ghost, a deft comic spin on Oscar Wilde’s witty tale, in which a 300-year-old English ghost fails to impress a family of Americans who refuse to be frightened. Writer Edgar Allen Poe takes the stage himself as the main character of Usher House, an unsettling chiller that has all the classic elements of Gothic horror: a high-strung recluse, a beautiful madwoman and a sinister doctor, all hidden away together in a crumbling manor house full of secrets.

LA Opera performances are experienced by vast numbers of Angelenos throughout the year, and not just through the musical events mentioned above. In its longstanding belief that the arts are essential to building our community, the company strives to ensure that everyone has the opportunity to experience or participate in opera. To that end, LA Opera presents a robust variety of outreach and family offerings, experienced by more than 135,000 people of all ages each season. Highlights of these initiatives include (to mention just a few):

Saturday Mornings at the Opera (Jan 13, 2018, and May 5, 2018)
LA Opera presents two Saturday morning, hour-long, interactive performances, preceded by fun and creative workshops for children that prepare the audience with art and music-making activities.

Jonah and the Whale  (March 16–17, 2018) — Jack Perla
James Conlon conducts an opera by composer Jack Perla and librettist Velina Hasu Houston, premiered by LA Opera in 2014. Created for audiences of all ages, and featuring more than 400 professional, amateur and student performers, the opera is presented free of charge as a gift to the community.

Great Opera Choruses  (April 28, 2018)
Grant Gershon conducts the LA Opera Chorus in a free performance featuring soloists from the Domingo-Colburn-Stein Young Artist Program. Audience members of all ages will have the opportunity to join in the fun by singing along to the Toreador Song from Carmen and other favorites.

Community Circle   (ongoing through the season)
The Community Circle seating program enables LA Opera to increase service to students, low-income senior centers, nonprofit service organizations and underserved community groups. Carefully selected groups can experience opera at a significantly reduced price (and even, at times, no cost). Over 150 tickets are set aside in the orchestra section for every mainstage performance to accommodate these special groups, who can apply online to be considered for the program. These tickets are not available for sale to the public.

“LA Opera has made a name for itself as a truly forward-thinking opera company,” said Marc Stern, chairman of LA Opera’s board of directors. “The adventurous artistic profile created by Plácido Domingo, James Conlon and Christopher Koelsch is wholeheartedly supported by our board of directors, whose generosity is extraordinary, and by our equally enthusiastic audience members. I am very proud of what we have accomplished in Los Angeles.”

“I am grateful that our audiences have responded so positively to the work we have created for them,” noted President and CEO Christopher Koelsch. “The coming season’s mainstage productions are every bit as impressive and noteworthy as anything presented on the world’s greatest stages. Our groundbreaking Off Grand series, which continues to grow in fascinating ways, will feature wildly diverse contemporary works presented in no less than four different venues, an enormous draw for new and younger audiences. I am also excited that two of the season’s presentations, Rigoletto  and Crossing, will enable our audiences to deepen their appreciation for the artistry of Matthew Aucoin, in his second season here as Artist in Residence.”

All programs, artists and dates are subject to change.

Yamaha is the Official Piano of LA Opera.