Music is in very good hands whenever Kamasi Washington is around. Last week at the Hollywood Bowl, the Los Angeles native showed off his artistic depth and breadth to go along with undeniable technical virtuosity and bold creativity.

He led his band through an evening’s worth of his eclectic yet approachable compositions that showed his skills in jazz while fearlessly incorporating other genres.

Hard bop? No problem. Soul and gospel? Certainly. Hip-Hop? Damn straight. Even Heavy Metal? Sure, let’s rock. Everything he touched was given its due while eventually being subsumed into his own style. No matter the starting point, the result was always compelling.

The ensemble kicked off their set with “Drive,” a new work with a traditional head/solo/head structure, rich yet transparent instrumental textures, and chord changes that any 1960’s jazz aficionado would recognize and enjoy. Mr. Washington demonstrated his tenor saxophone skills with a noteworthy solo, with trumpeter Dontae Winslow slaying a couple of choruses as well.

The two works that followed highlighted both of the talented basists sharing the stage throughout the night. Miles Mosley showed off his range on the stand-up bass, picking, strumming, and bowing his way through “Truth.” Thundercat, Mr. Washington’s former UCLA band mate, then reminded everyone why he deserved a headline turn of his own at the Hollywood Bowl, wowing the crowd with his complex funk-tinged work on “Re Run;” DJ Battlecat provided strong support.

Outside collaborators were a part of the concert’s darker, more aggressive moments. Terrace Martin, Daylyt, Mic Holden, and G Perico took the stage to rap their venting of grievances in “Pig Feet,” while Metallica members Kirk Hammett (guitar) and Robert Trujillo (bass) helped everyone through a thunderous rendition of Mr. Washington’s arrangement of “My Friend of Misery.”

Interspersed among those were two more joyous works which balanced the mood. “Sun Kissed Child” was inspired by the recent birth of Mr. Washington’s daughter, and he gave vocalists Patrice Quinn and Dwight Trible great opportunities to sing out, heightening the emotional impact of the piece’s climax. “Announcement” from Becoming, the Netflix documentary of Michelle Obama, was spiritual and uplifting.

The evening ended with “Fists of Fury,” his anthemic cover of the main theme from Bruce Lee’s similarly named 1972 film, Fist of Fury. Mr. Washington and crew morphed the inherently combative and defiant music into something more celebratory.

The crowd took it all in with massive cheers, begging for an encore which sadly never came due to strict time constraints Bowl concerts face. No matter. For most of the audience, this was their first live concert since the lifting of pandemic restrictions, and “Fists of Fury” sent them into the night with energy to face whatever new trials and tribulations might be heading their way. 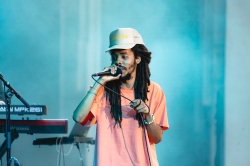 Opening the concert was hip-hop artist Earl Sweatshirt, joined by DJ Robert Mansel, keyboardist Domitille “DOMi” Degalle, and drummer JD Beck. The rapper’s 45-minute set traversed much of his oeuvre. Yet while he made a point of repeating that he “wasn’t afraid to get personal” in between some of his songs, most of his vocals and any messages he tried to deliver were muddied and drown-out amidst the backdrop of the sound mix which overwhelmed all else.

The most ear-catching music of the set was actually played in the opening jam by DOMi and JD Beck. The incredibly young pair (Beck is just 17 years old, and DOMi is in her early 20s) often perform together in their own right, and after this it was easy to understand why. Their baroque-tinged drum-n-bass grooves and melodies appropriately set the table for everything that would follow while adding a unique element. The concert was better for their short but impressive contribution.

Complete collection of pictures in the gallery below. (All photographs taken by Farah Sosa, provided courtesy of the Los Angeles Philharmonic Association)