All Reviews / Music News & Info: Classical / Other classical music concerts and recitals (in So Cal and beyond) / Reviews 2011/2012 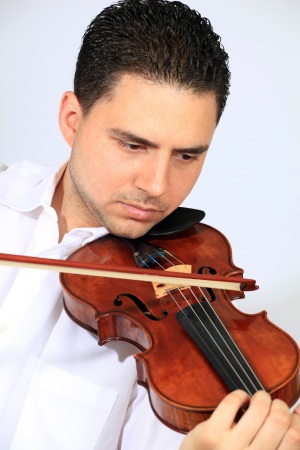 One of the benefits of living in a “big city”  is that arts and entertainment options are relatively frequent and easy to come by.  This provides both opportunities and challenges to both audiences and performers.

As much as I love living in Southern California, I have to admit that it is easier on audiences and performers alike to find each other in older, more traditional cities in Europe and the East Coast.  Locals and tourists in London or NY can easily discover an interesting concert for little or no expense just by walking around, whereas our spread-out 20th Century version of a metropolis makes it much harder to stumble upon such things or make spontaneous decisions to attend them.  There has to be something about performers, program, and price to make one willing to overcome freeways, paid parking, and a mid-week concert date.

Such was the case this past Wednesday evening in a recital by violinist Radu Pieptea with pianist Bryan Pezzone.  They offered a varied program of five works that included two that I particularly like (Prokofiev’s Sonata No. 1 and Jascha Heifetz’s transcription of Gershwin’s Three Piano Preludes) at a price everyone could appreciate:  free. 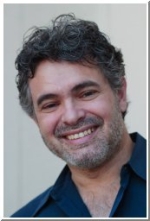 I had been familiar with Mr. Pezzone’s work as former Principal Keyboardist for the Hollywood Bowl Orchestra and a couple of other concerts in which I’d seen him perform, but hadn’t heard of Mr. Pieptea before.  Some quick research yielded the following:  the violinist first gained attention at the relatively tender age of 14 after winning the Greater Dallas Youth Orchestra’s 1993 Concerto Competition, following that up with a 1996 Los Angeles Music Center “Spotlight Award” while a senior at Santa Monica’s Crossroads School.  A review of his 1998 recital by Timothy Mangan in the Los Angeles Times was generally positive, and, combined with a YouTube video of him in a 2001 performance of the Korngold Violin concerto, sparked enough curiosity to make me want to trek Downtown to check it all out.  Judging by the nearly full house at the Colburn School’s Zipper Hall, I wasn’t the only one.

Overall, it turned out to be a good choice.

Mr. Pieptea proved to be a solid violinist, with a consistently pure and beautiful tone that were shown to full effect in Zipper Hall’s clean acoustics.  He handled the variety of technical hurdles with seeming ease, the end of the first movement of the Prokofiev being particularly impressive.

His stage demeanor was reserved, almost stoic, especially in works where he had to rely on his sheet music.  This usually worked in Mr. Pieptea’s favor, allowing the listener to focus solely on the sound of his violin and the music being played; however, that same reserved demeanor sometimes crept into his playing and one wished for a little more intensity, especially in the first half of the program.  He injected a bit more personality into the second half, especially in a sweeping rendition of the Grand Polonaise No.1 by Wieniawski, and even cracking a couple of smiles while he was playing.  Though the results were a little rougher around the edges than they were before intermission, they were also more musically satisfying.

Mr. Pieptea benefitted greatly from Mr. Pezzone’s support.  The pianist offered sensitive and balanced accompaniment, providing a nuanced foundation to the violinist without ever upstaging him.  I don’t think Mr. Pieptea could have had a better partner, and I wonder if his straightforward approach would have been as successful without the pianist’s rich playing to serve as a foil.

The supportive crowd gave a nice ovation at the end of the performance, and in return, the performers gave a spirited rendition of Brahms’s Scherzo for violin and piano as an encore.

—————-
Photos courtesy of the artists