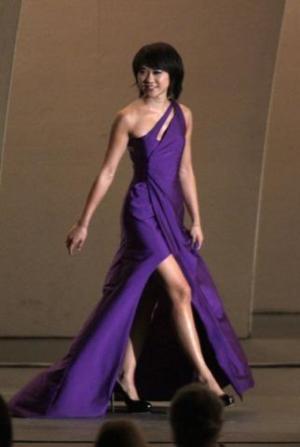 Tchaikovsky concerts at the Hollywood Bowl are common occurrences.  Thursday night’s Los Angeles Philharmonic concert was pretty typical, with a program featuring a pair of frequently heard warhorses:  the Piano Concerto No. 1 and the Symphony No. 4.

Then again, in some ways, this wasn’t all that typical.  There were no fireworks, no 1812 Overture, no USC Trojan Marching Band.  Instead, we got Gustavo Dudamel conducting and Yuja Wang playing the piano.  I’d say that’s more than a fair trade.

Some people may not agree, though.  Both Mr. Dudamel and Ms. Wang  benefit/suffer from marketing machines and media attention focusing on things not directly related to their music making.  This leads to claims that either or both are over-hyped, triumphs of fluff over stuff, all show and no go.

Sure, image is a big part of each of their personas.  But don’t believe the naysayers.  Whatever one may think of their style, there is at least as much substance, if not more. Both of them are musicians who already offer some exciting and probing interpretations of major works despite their relative youth.

Thursday night was the latest example of this.  While the performances were not flawless, they were compelling — they didn’t try too hard to make a big impression, nor were they content to settle for the ordinary or cliché.

Ms. Wang’s take on Tchaikovsky’s ubiquitous First Piano Concerto was unabashedly romantic.  She stretched lines without ever distorting them, and she clearly reveled in opportunities to show off her ability to play with breathtaking speed; I don’t think I’ve ever seen anyone play faster.  During more introspective moments, she wasn’t afraid to play quietly — even daringly quiet, especially for the Bowl.  It was an elegantly slinky performance, matching the purple dress she wore on stage (more on that below).

That said, it wasn’t perfect.  She missed more than a few notes during some of those blazingly fast runs.  Sometimes, Mr. Dudamel seemed to want to go a bit slower than she wanted to, especially at the very beginning and the very end.  None of that mattered to the very large crowd on hand, who responded with a standing ovation — an immediate and decisive standing ovation, not one of those slowly evolving things where people stand up in parts like a crowd doing a disjointed wave at a baseball game.

After intermission, the orchestra played a fine rendition of the Tchaikovsky Fourth Symphony.  Mr. Dudamel gave the LA Phil musicians room to play with individual flair, while still maintaining cohesion.  The first movement danced,  bold one moment and relaxed the next.  The second was warmly spacious, featuring beautiful work by Principal Oboe Ariana Ghez and especially Principal Bassoon Whitney Crockett.  The third movement featured Mr. Dudamel letting the orchestra  play with minimal overt direction, employing some of the more subtle gestures for which he has become famous:  a raised eyebrow here, a bump of the hip there, all on full display thanks to the Bowl’s large video screen.  The final movement was bright and triumphant without suffering from bombast.

Overall, it felt easy-going, even loose in a good sense.    He pushed and pulled at the symphony’s form in a personal, but natural way.  The appreciative crowd cheered loudly, and Mr. Dudamel made multiple curtain calls.

One thought on “Style and substance in equal measure: Wang joins Dudamel and the LA Phil for some Tchaikovsky”