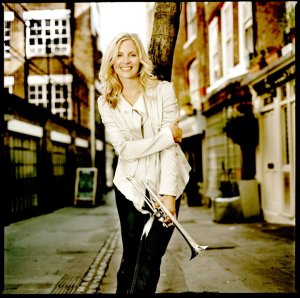 You hear of a night of Haydn conducted by the ever-sunny Nicholas McGegan, and you probably think, “That’s nice.”  You notice that the Haydn Trumpet Concerto will be the centerpiece of the evening and you might say, “Hmmm, haven’t heard that performed in a while.”   You realize that Alison Balsom is the trumpet soloist, and you drop whatever you had planned and you go.

At least that’s what you should have done Tuesday night, but you probably didn’t.  And that’s a damn shame.

Judging by the relatively sparse attendance at the Hollywood Bowl, you weren’t the only one.  Haydn apparently isn’t the draw that Beethoven or Mozart or Tchaikovsky is.  Perhaps the sheer volume of his output waters down any individual work’s popularity, making an all-Haydn night less compelling to the masses.  But if there’s one work that should stand out, it’s the trumpet concerto.  Written as a showpiece for an instrument that in the composer’s time had just recently evolved to be able to play a full chromatic scale, it is compact, lyrical, virtuosic — what’s not to love?

Part of the problem is that we just don’t hear it live often enough.  As trumpet concertos go, the Haydn is bread and butter, but compared to concertos in general, it may as well be foie gras:  rich and juicy, comes in small portions, damn hard to find.

If memory serves, the last time the Los Angeles Philharmonic performed it was in 1995 when former Principal Trumpet Thomas Stevens was the soloist.  In that time, there have been multiple performances of relative rarities like the Lutosławski cello concerto, the Korngold violin concerto, and Rodrigo’s Concierto de Aranjuez for guitar — don’t even get me started on the Lady Gaga-ish ubiquity of the “Rach 3” or the Mendelssohn violin concerto.   But I digress . . .

On top of all this, you get Alison Balsom.  If there’s a star among classical trumpet virtuosos these days, she is it (and, no, I don’t count Wynton Marsalis since he doesn’t really play classical music anymore . . . OK, maybe you’ve got an argument if you bring up Håkan Hardenberger, but still . . . ). 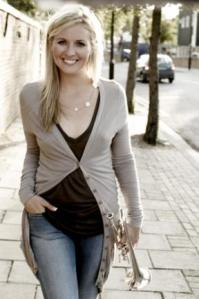 Ms. Balsom has everything you want in a soloist:  virtuosity,  panache, personality.  She’s also got musical range:  for her debut with the orchestra a few years ago, she played the thoroughly obscure and rather difficult expressionistic work by German composer Bernd Alois Zimmermann’s concerto, “Nobody knows de trouble I see.”

Lastly, let’s not ignore the obvious — she’s got one thing you almost never find in a solo trumpeter:  she’s gorgeous.  Not that she over-sells that — or even really sells it at all — but in a part of the musical world dominated by men, having beauty combined with talent and taste certainly helps you to stand out from the crowd. (Given all that, I’m a bit shocked that  a certain local music critic with a recent track record of drooling in print over the lovelies wasn’t there to a give his own lurid account of her visit.  But, again, I digress . . . ).

Tuesday night, Ms. Balsom walked on stage in a striking sleeveless, floor length dress, colored mostly in robin’s egg blue with impressionistic swathes of purple and green.  Gasps and exclamations of “Wow!” were audible around me from men and women alike.  She got to her spot near the podium, licked her chops, and got ready for work.

Her playing of the Haydn concerto turned out to be masterful.  She combined pinpoint accuracy with subtle grace and a rich tone.  This wasn’t a blow-the-roof off kind of performance, but that’s not really what the Haydn concerto is about.  When a  moment called for volume — say, during her own stylish cadenza — she wasn’t afraid to cut loose and roar.  More often, however, she kept her dynamics  somewhere south of a comfortable forte throughout the work, easing into some entrances while attacking others.  You couldn’t ask for much more.

As if that wasn’t impressive enough, her encore was a beautifully slippery rendition of Astor Piazzolla’s, “Libertango,” arranged for trumpet and orchestra by Julian Milone.  She bent notes and spun her way through runs, both with and without a mute, in ways that Papa Haydn could never have imagined a trumpeter could do.

Mr. McGegan and the orchestra provided bright, sensitive accompaniment in the Haydn, and while I’ve certainly heard them swing with more ease than they did in the Piazzolla, they sounded in good form.

Of course, there was much more Haydn that was played.  Mr. McGegan is a regular guest on the LA Phil’s podium, especially when it comes to baroque and classical repertoire, and he curated  a nice sampling of the composer’s oeuvre.  The Symphony No. 30 in C major was a pleasant enough opening to the evening’s festivities.  The three movement work showed the smaller contingent of players sounding in fine shape.

After intermission, they played two works written during Haydn’s famously productive stay in London.  Mr. McGegan gave a cheeky introduction, talking about how an older, still married Haydn found great happiness in the company of a Rebecca Schroeter, a much younger British widow, and how this happiness radiates throughout his London compositions.

The cheery and rarely played Overture to Windsor Castle made his point well enough.  The more popular Symphony No. 103 in E-flat major (“Drumroll”), with its somewhat brooding opening, seemed a less likely candidate at least at first, though in Mr. McGegan’s batonless hands, had more propulsion than it often has.  By the time the main theme kicked in, all was warm and glowing, even sprightly, until all four movements ended.  Nathan Cole, sitting in the concertmaster’s chair for the concert, played his prominent second movement solos with distinction, as did Ariana Ghez (Principal Oboe) and Demarre McGill (guest principal flute), and all were rewarded with foot shuffles from their on-stage colleagues at the movement’s end.