A new composition for a new year.  Seems rather poetic, doesn’t it?  Often such gestures work better in concept than in practice, but thanks to Martin Grubinger‘s virtuoso performance of The Tears of Nature, Tan Dun’s new percussion concerto receiving its U.S. Premiere last Friday night care of the Los Angeles Philharmonic, this one worked wonderfully.

Mr. Tan creates an eclectic yet accessible soundscape that ranges from melodic to clangorous and everything in between.  It begins simply enough:   Mr. Grubinger led the orchestral percussionists in ensemble, clicking together semi-tuned pairs of stones; muted harp played in the background.  As the soloist walked from the front of the stage to the back where a battery of seven timpani were set up, the score began to expand and grow increasingly complex.  The soloist’s pitch-bending timpani cadenza served as the high-point of the movement.

The second movement had a similar developmental arc:  a quiet, dreamy opening section, with atmospherics care of the orchestral percussionists bowing Tibetan singing bowls; later, an aggressive ending featured Mr. Grubinger with some amazingly fast fortississimo (yes, “fff”) four-mallet work on marimba.  The energetically cheery finale featured variations on a recurring 8-note melodic theme that made its way through the orchestra, not to mention being featured in another cadenza played by Mr. Grubinger, this time working on every part of the large array of tuned and non-tuned instruments set up at the front of the stage.

This was only the second time that The Tears of Nature has ever been performed, but you wouldn’t have guessed it by the way Mr. Grubinger passionately and athletically played the large solo part without any sheet music.  Just as importantly, he maintained an unwavering musicality throughout the 30+ minute work regardless of how hard he banged his sticks and mallets.  The LA Phil, conducted by Christoph Eschenbach, provided excellent support. 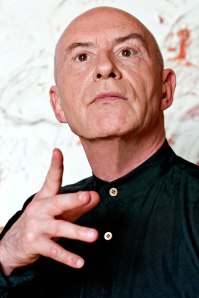 When it was all finished, the crowd let out a thunderous cheer and gave him an immediate standing ovation (not one of those slowly evolving ones where people begrudgingly get to their feet).  After a few curtain calls, Mr. Grubinger brought out a new snare drum to play an encore:  Planet Rudiment, his own rollicking composition.  He noted that when taking drum lessons as a youth, he and his friends would marvel at American marching bands, and to play this particular work in the US at Walt Disney Concert Hall was a bit of a dream come true, even if there wasn’t much truly musical about it.   He then let it rip with an old-school flair, sometimes playing with one arm behind his back, bouncing one of the drumsticks off his arm or shoulder, and other such stunts.  It was showing-off in the most fun sense.

After that whiz-bang performance, something as  potentially mundane as the Tchaikovsky Fourth Symphony seemed rather superfluous.  Fortunately for all in attendance, Mr. Eschenbach led a vivid account of this oft-played warhorse which made it worthwhile.

It was generally a standard interpretation, though he personalized little bits here and there and particularly seemed to revel in the second movement Andantino with somewhat slower tempos.  During the pizzicato-filled third movement, he mostly kept his hands to his sides as Gustavo Dudamel had done with the same movement during the past summer’s performance at the Hollywood Bowl; but whereas Mr. Dudamel led that section using more body language, Mr. Eschenbach seemed content to just stare or glare at the section to whom he was giving a queue, adding a head bob from time to time.

Aside from a smattering of horn flubs from Andrew Bain and crew, the LA Phil sounded in solid form coming back from the holiday break:  strings warm and cohesive, woodwinds bright and sinewy, brass robust.  Overall, it was a very good way to kick off the new year.