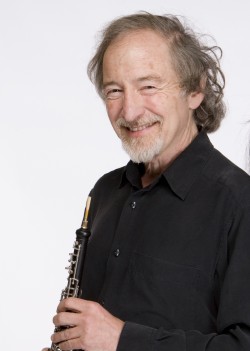 For this year’s rendition of its “Baroque Conversations” series, the Los Angeles Chamber Orchestra has decided to devote all five concerts this season to the music of Bach.  Last Thursday’s series opener focused on his Trio Sonatas, with Allan Vogel, LACO’s renowned Principal Oboe, serving as the genial and informative host.

As Mr. Vogel explained, one of the more curious aspects of the Trio Sonatas as they were performed that evening  is that they required a quartet of musicians; the “trio” in the titles refers to three musical parts or voices, and for each of the four examples played at Zipper Hall on this occasion, the continuo line was played by a harpsichord doubled by a either a cello or bassoon.

Each of the Trio Sonatas performed had its own flavor, thanks both to the variety of moods in Bach’s writing and the varying choice of instrumentation.  It proved to be an enthralling selection of music, beautifully and convincingly played by the various members of the orchestra.  Only the most jaded period-practice purist could have walked away unhappy.

The concert opened with the Trio Sonata in C Major, BWV 1037.  It is the source of some controversy, with many attributing its authorship to Johann Gottlieb Goldberg, Bach’s student made most famous as the namesake of Bach’s Goldberg Variations.  Mr. Vogel clearly disagreed with such talk, saying that, “we know it’s by Bach because of its spiritual quality.”  Regardless of who actually penned the work, it was originally intended for two violins.  The decision to perform it with violin and oboe not only allowed for different textures, it also seemed to highlight its melancholy qualities early and its sunnier disposition as the work progressed.

The Trio Sonata in G Major, BWV 1039 for Two Flutes paired David Shostac, LACO’s veteran Principal Flute, with new Second Flute Sandy Hughes.  It was the first time the two had played chamber music together publicly, and judging by how was well they worked together, it sounds like there is already very good chemistry between them.  Ms. Hughes certainly played gorgeously, and the praise which her more senior colleagues heaped on her in their post-concert comments seems very well deserved.

My favorite of the works for the evening was the Trio Sonata in C major, BWV 529.  Originally written for solo organ (with the three voices of the trio being played by right hand, left hand, and pedals), this version featured viola and oboe, with bassoon replacing cello as part of the continuo.  That unique combination of instruments opened up the music and made for particularly earthy timbres.  The end result was thoroughly charming.

The final work of the evening, the Trio Sonata for Violin and Flute from The Musical Offering, BWV 1079, was also the most dense and most serious.  Bach’s deft handling of a clunky melody given to him by Frederick the Great is a wonder to be hold, especially as the theme gets passed between the various instruments.

Each of the LACO musicians participating in the evening played with a combination of technical skill and musical grace, but special attention must be paid to Patricia Mabee, the orchestra’s Principal Keyboardist.  Not only was she the only person who played on all four of the trio sonatas, she skillfully improvised the right-hand realizations on the harpsichord for three of the works.

BACH:  Trio Sonata in C minor for Flute and Violin from The Musical Offering, BWV 1079