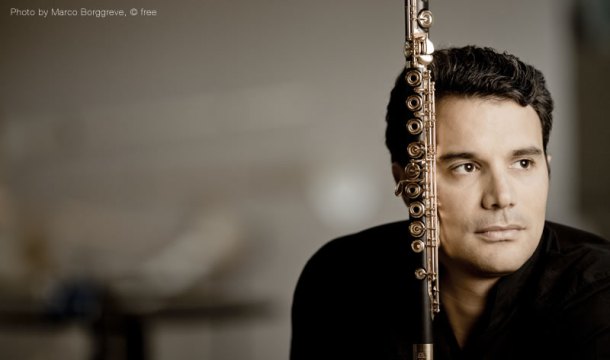 Late last week, multiple sources started buzzing with word that the Los Angeles Philharmonic had finally filled their vacant Principal Flute chair.  According to those sources, French flutist Julien Beaudiment was hired for the position.  The current Principal Flute of the Orchestre de l’Opéra National de Lyon, he played a stint in Walt Disney Concert Hall this past February as guest principal.

Yesterday, the LA Phil’s PR folks confirmed to me that Mr. Beaudiment was indeed offered the position  — and that’s it.  No further confirmation yet on whether or not he accepted the offer, and if he had, when he might begin his tenure.

Of course, even if he has already accepted the job, that’s just the first step in a longer process — especially where Principal Flute is concerned, keeping in mind the previous two holders of that chair.  After accepting, he has to want to keep the job (cough, Mathieu Dufour, cough cough), and then the orchestra and Music Director Gustavo Dudamel have to want to grant him tenure (see David Buck).

We’ll wait and see how this plays out, and I’ll be sure to keep everyone up to date is it does.  In the meantime, congrats to Monsieur Beaudiment on being offered the prestigious position, and congrats also to the LA Phil for finding someone who they feel is worthy of this important job

Speaking of flutists on the move . . . Demarre McGill continues his move up the orchestral ladder to ostensibly bigger, better-paying gigs.  The occasional guest principal with the LA Phil, current Principal of the Seattle Symphony, and former Principal of the San Diego Symphony, had a successful audition with the Dallas Symphony, and word on the street is that he’s taking the job in Texas.  Congrats to Mr. McGill too!