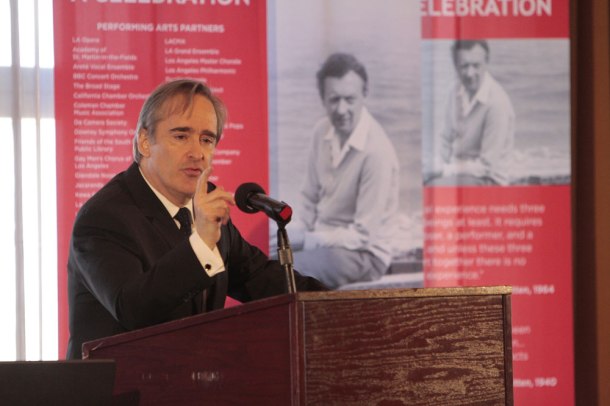 This entire year, Los Angeles Opera has been spearheading a city-wide celebration of Benjamin Britten’s centenary:  “Britten 100/LA.”  Front and center at many concerts, presentations, and events has been their Music Director, James Conlon.

Britten’s actual 100th birthday is tomorrow:  Friday, Nov 22, 2013.  Mr. Conlon will be spending the day scooting across the city:  running rehearsals, attending receptions, and conducting two FREE Britten-filled community concerts.  I’ll be spending the day — the entire day — hanging out with him.  Really.

You see, a week or so ago, the good folks at LA Opera asked me if I’d want to spend Britten’s 100th birthday with Mr. Conlon — getting exclusive behind the scenes access to him the whole day: before, during, and after each of the events.  I’m no fool.  It took me about 5 microseconds to say “Uh, YEAH!  As if . . . ” (or words to that effect).

I immediately left Brandise Danesewich a voice message asking if she’d want to join us to take photos.  Despite being somewhere out in the middle of the desert, she called me back right away and said, “Absolutely — that’d be awesome!”  She’s no fool either.

So during the day, I’ll be tweeting status updates, observations, and quotes from Mr. Conlon.  Brandise will post pictures.  In the near future, I’ll share an All is Yar post or two with a more detailed look back at the day.  I chatted briefly with the maestro last night, and he said, “I hope I won’t be too dull.”  (Fat chance, sir, fat chance.)

Thanks to the wonders of the internet and social media, you can still join in the fun even if you aren’t going to be riding in the car, blowing out Britten birthday candles, or other such things with Mr. Conlon as Brandise and I will be.  Here’s how:

And just because it’s Britten’s birthday doesn’t mean it has to be all about Britten all the time.  Wanna ask him about the new LA Opera production of The Magic Flute that opens Saturday?  Go right ahead.  Needing to beg to have your favorite opera performed in coming seasons?  Fair game.  Checking his thoughts on whether or not Kevin Sumlin would make a better USC head football coach than Ed Orgeron? Fight on.

See you Friday at #DaywithConlon