All Reviews / Architecture / Music News & Info: Classical / Other classical music concerts and recitals (in So Cal and beyond) / Reviews 2013/2014

Yuval Sharon and the intrepid team at “The Industry” have done it again.  Last year, they raised operatic hell with their innovative conceptualization of Anne LeBaron’s Crescent City.  This year, their take on Chris Cerrone’s Invisible Cities has an entirely different vibe, but is innovative in its own way. Invisible Cities is one of those artistic concepts that is so wonderfully crazy, it had to be brought to life. 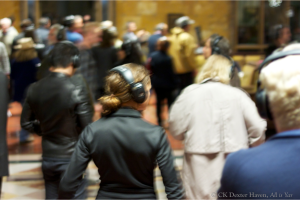 An opera in a working train station performed while spaces are open to the public?  Yup.  Singers and dancers roaming all over historic Union Station almost never in the same room at the same time, all while the chamber orchestra stays ensconced in a side room?  Sure.

The underlying story is based on Italo Calvino’s book of the same title (Le città invisibili in its original Italiano):  a philosophical and poetic novel where  Marco Polo is attempting to tell an aging Kublai Khan stories of 55 cities within his empire which he has never seen. Messers. Sharon & Cerrone’s re-imagining of the novel limits Polo’s storytelling to three of the cities, but the relationship between the emperor and traveler — their inner conflicts and challenging attempts at communicating with each other despite not speaking the same language  — remains the heart and soul of the story. The cast spends much of the opera looking and behaving like the general public:  a baseball-cap clad Marco Polo is first seen leaning against a lamp-post in a courtyard; Kublai Khan sits in a wheelchair wearing an army surplus styled jacket; the vocal quartet makes their initial appearance as travelers in a rush to catch a train, frantically talking (singing, really) into their cellphones as they dash about with rolling suitcases in tow.

All of it works brilliantly, but not in the way you expect it to.  This Invisible Cities is simultaneously serene and hectic, confusing yet captivating.  It can be a bit disjointed, even somewhat distracting, but in the end is thoroughly delectable.

The reason for that is not immediately apparent if all you do is try to break down the opera’s individual components.  The music itself is appealing without being trite, but never becomes a driving force for the experience.  The performers are talented and often poignant, though without ever blowing you away with virtuosic turns of phrase or dramatic intensity.

Even the much talked-about theatrical conceit — forcing audience members to make choices about which performer to follow into which space — is not original:  the 1980’s-era play, Tamara, similarly asked Angelenos to navigate passageways of a local Art Deco landmark (in that case, the American Legion Hall in Hollywood); more recently, Sleep No More asked New Yorkers to don Venetian-style Carnival masks before they chased their preferred characters through an abandoned hotel in a wordless take on Macbeth.

Instead, this particular operatic experience is a case of the whole being greater than the sum of its parts.

It helps that the production makes the most of technology — an impressive pair of Sennheiser wireless headphones — to enable paying audience members to hear all the performers even if/when they can’t be seen.  At the same time, there is a populist element in the production in that it allows non-paying audience members (a mix of unsuspecting folks at Union Station waiting for trains and  music fans who weren’t able to get tickets to the sold-out performance) to enjoy the performance aided only by the excellent natural acoustics of the space.

In the end, the most compelling — and most important — element of  Invisible Cities is this:  the opera fully integrates and embraces Union Station, in all of its melancholy majesty, through both its physical presence as well as its underlying historical and emotional symbolism.

The youngest of the great American train stations used to be the city’s main connection to the rest of the country.  Visionaries, city planners, and alternative transportation enthusiasts are trying to return it to some semblance of its former glory, perhaps even to the vibrancy of the Union Stations of Chicago or Washington, D.C.; however, such ideas remain on the optimistic side of reality.

Whether LA’s Union Station can or should try to emulate such places is less important than the fact that some people think it should.  It is at once a gleaming symbol of a glamorous past remembered but long abandoned, of opportunities missed, and of possibilities still envisioned and dreamt of. . . . just like the far-flung locales described in Invisible Cities.

Within this context, using this particular location for Invisible Cities takes the allegory and symbolism within the original story and forces the observer to consider Los Angeles itself as one of the invisible cities of Marco Polo’s legends, perhaps even the quintessential collection of invisible cities or the invisible city in and of itself.  The context takes an opera that could, and should, be successful in any city and makes it a uniquely compelling Los Angeles experience.

The opera has become an unmitigated success.  The initial run of performances sold out so quickly that the producers extended the run, only to see those tickets get immediately snapped up as well.  There’s already talk of future productions of Invisible Cities in other major metros.  Let’s hope that after making its own Marco Polo-like travels to distant lands, it returns home to Los Angeles for additional performances. 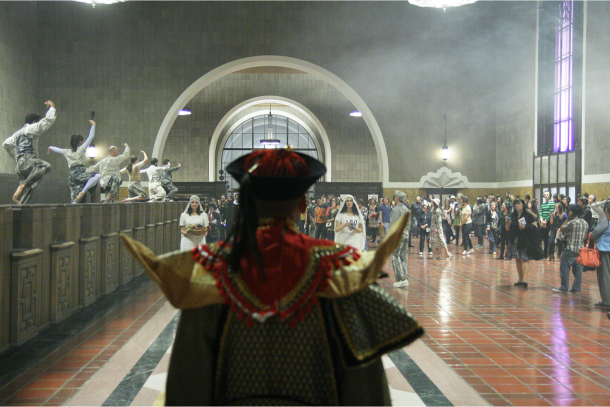 Music and libretto by CHRISTOPHER CERRONE

Based on the novel by ITALO CALVINO