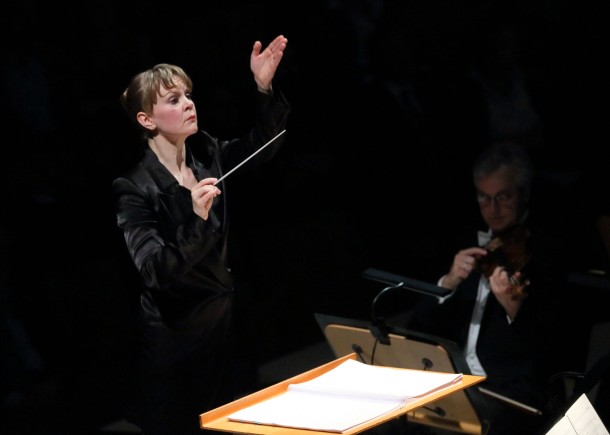 The Los Angeles Philharmonic announced this morning that Susanna Mälkki has been appointed as Principal Guest Conductor of the orchestra.  The Finnish maestra’s tenure will officially begin with the 2017-18 season, with an initial contract to last three years.  She  will conduct three subscription weeks, Green Umbrella concerts, as well as other projects with the orchestra to be announced.

I was bummed out that she wasn’t appearing here in the coming season, but this totally makes up for it in its awesomeness.  Why?

First and most importantly:

Secondly, her conducting style and repertoire nicely complements that of Gustavo Dudamel:

Third, this appointment enables the LA Phil — and us as the audience — to build a deeper relationship with her specifically because she’ll be spending at least three weeks per year in Southern California.  That level of commitment between any orchestra and a guest conductor is noteworthy, and it is particularly rare with this orchestra.

Finally, it’s worth noting that Ms. Mälkki three-year tenure at the LA Phil ends one year before Mr. Dudamel’s own contract as Artistic & Music Director.  That could end up being a completely meaningless coincidence — or it could make her the leading candidate to replace Mr. Dudamel in the top job once 2022 rolls around.  There are neither guarantees nor precedents, but should the Phil and The Dude decide to part ways at that time, she’d probably be among the names floated even if she didn’t already have official ties to the orchestra.  File that thought under, “Things that make you say, ‘Hmmmm . . . ‘ ”

In the end, this is terrific news for the orchestra and for Southern California classical music fans.  To them and us, I offer an enthusiastic, “Huzzah!”

The full press release from the Los Angeles Philharmonic is HERE.