It’s time once again for your roundup on recent personnel movement (and lack thereof) at the Los Angeles Philharmonic.  There is much to cover, so let’s get right to it, starting with the biggest news of the summer . . .

The stories behind the departures of Ariana Ghez and Carrie Dennis

There was no official press release regarding their departure, but the news spread like wildfire nonetheless.  In fact, I’ve never received so many questions about LA Phil personnel as I have over the past few months.

Both were well-established in their positions.  Both have been solid to spectacular musicians on stage, and both have also been known to have polarizing personalities off of it.  Both of their departures caught LA Phil fans off guard.  Could their situations have been related in any way?

The story with Ms. Ghez, Principal Oboe since 2006, is relatively straightforward.  She had been on sabbatical from the orchestra during the 2016-17 season.  This past spring, she made her leave permanent, choosing to pursue interests outside of the orchestral world.  She and her family now reside in the Pacific Northwest.  It was not exactly expected, but to some insiders, it didn’t come entirely as a shock.

Ms. Dennis’s departure caught even fewer insiders off guard, with many being surprised that it didn’t happen sooner even while they had hoped that it wouldn’t happen at all. . . .  Given that there are a lot of rumors floating around, perhaps we should start at the beginning . . .

Her 2008 appointment as Principal Viola was noteworthy, not only because she came to Los Angeles after having originally turned down the job two years prior for the same position at the Berlin Philharmonic, but because she filled a chair that had been vacant for a number of years.  After the LA Phil and the previous Principal Viola, Evan Wilson, parted ways, many auditions were held and multiple musicians were “qualified” by the orchestra, but the position remained empty:  some candidates, like Ms. Dennis, chose to take positions with other orchestras; others chose to remain in their current positions; still others were never offered the position by then-Music Director Esa-Pekka Salonen despite being approved by the orchestra’s audition committee.  All things considered, her hiring was a coup.

Quickly after taking her position in the LA Phil, Ms. Dennis was lauded for the high quality of her playing.  In a 2010 story about her for the Los Angeles Times, Donna Perlmutter wrote:

“Admiration for her virtuosity doesn’t stop at the music stand, though, according to many of the musicians:

She was, by all rights, one of the orchestra’s stars, and I had included her on my 2014 list of “Top 10 favorite LA Phil hires of the past decade.”

At the same time, she also became known for two other things:

These challenges have become so well-known that some casual observers have hypothesized that either/both form the basis of Ms. Dennis’s departure; however, neither of them was actually a critical factor which led to her current absence from the LA Phil roster.  Instead, it stemmed from something more basic:  the ability to show up when she was supposed to.

Near the end of the 2016-17 Walt Disney Concert Hall season, Ms. Dennis was a no-show for a mid-weekend matinée concert; making matters worse was that the program she missed included viola solos which had to be played by the LA Phil’s Associate Principal Viola, Dale Hikawa Silverman, with no prior notice.

It apparently was not the first time she was absent at the beginning of a service.  Over the past few years, there had been independent reports from reliable sources that Ms. Dennis had run afoul of various orchestra rules on more than one occasion.  Some had mentioned that similar transgressions made by other musicians would have led to their outright dismissal from the LA Phil; however, Ms. Dennis’s supporters — chief among them being Gustavo Dudamel, the orchestra’s Music & Artistic Director — came to her defense and were willing to give her leeway, preventing her from receiving the most severe consequences. Unfortunately, this latest miscue may have been the last straw.

What happened next is not 100% clear; those inside the orchestra are understandably reluctant to say anything about it, even off the record; however, her name was dropped from the roster soon afterwards.  Draw your own conclusions from there. . . .

auditions to fill the Principal Oboe chair will be held in early October.  The timing is particularly noteworthy since it will occur one month before the Chicago Symphony holds their own auditions for the same position; that vacancy was created when Alex Klein, longtime CSO Principal Oboe who had returned after having recovered from a debilitating injury, was denied tenure one year into his second stint with the orchestra.

It’s uncertain how easy or difficult it will be to find replacements for Ms. Ghez and Ms. Dennis.  Both were hired after prolonged attempts by the orchestra to fill their chairs.  On the other hand, the LA Phil has recently had more good fortune than bad in filling principal chairs, and the orchestra is even more attractive now than it was last decade.  I guess we’ll know more in six to eight weeks.

Thomas Hooten:  off to Chicago or not? 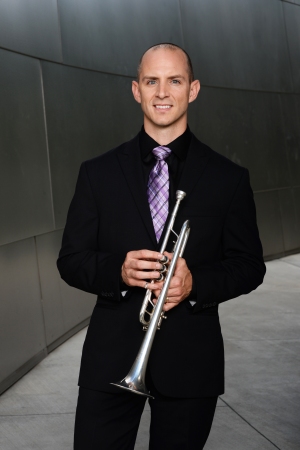 With the Chicago Symphony losing its own Principal Trumpet, Chris Martin, to the New York Philharmonic in February, there was speculation/concern/fear among the LA Phil faithful that Mr. Hooten would pursue the open position in the Windy City and/or the Chicago Symphony would go after him.  After all, the 1st Chair in the CSO was his original dream job, he’d get to play with his mentor, CSO 2nd trumpeter John Hagstrom, and his wife, trumpeter Jennifer Marotta, is a Naperville, IL, native who still has family in the area.

Adding fuel to that fire was news a few weeks later that Mr. Hooten would appear as guest principal with the CSO for the two weeks Esa-Pekka Salonen was to guest conduct the orchestra.

That Mr. Hooten was impressive in those appearances would be of no surprise to Los Angeles audiences; much more telling was that even Chicagoans, who can be fickle about their trumpet players, were giddy about his performance.  Lawrence A. Johnson of the Chicago Classical Review was particularly effusive:

“Hooten’s playing of the prominent trumpet role [in Stravinsky’s Petrushka] was nothing short of spectacular– richly projected with gleaming tone and consistently stylish and attentive to the narrative.  If the past two weeks were an audition to fill the chair left vacant by the departed Christopher Martin, Hooten passed with flying colors.”

Then the CSO auditions came and went in June with no offers handed out, and rumors swirled that Mr. Hooten had chosen not to participate.  Could that be true?

“Yes, that’s correct,” Mr. Hooten confirmed to me during a recent conversation.

He stressed  how much he enjoyed playing as guest principal in Chicago, and what a great orchestra it is.  “But I had to ask myself, if I took that audition and was fortunate enough to be offered the position, in the end would I prefer to accept that job or stay in the Los Angeles Philharmonic?  And I realized that I would really rather stay here.”

“I love L.A.,” he reiterated.  “I love the LA Phil.  I’m excited at what we’re doing in the brass section here and where we’re going.  I’m very happy with everything, and I don’t have any reason to leave.”

So Southern California fans can rest easy if not rejoice outright, while Chicago’s search continues as they regroup and try again.

Meanwhile, Mr. Hooten and Ms. Marotta take over trumpet studies at the USC Thornton School of Music this fall semester.  He had joined the USC faculty in 2016 and she joined just a few months ago.  Going forward, the two will run a joint studio in a way similar to how legendary trumpet pedagogues Barbara Butler and Charlie Geyer currently teach together at Rice University’s Shepherd School of Music and for many years before that at Northwestern’s Bienen School and Rochester’s Eastman School.  “My first year at Thornton was great,” said Mr. Hooten, “and it’ll be awesome teaching with Jennifer at USC like we had at Kennesaw State previously.”

Two LA Phil veterans will officially retire at the end of the summer:

The third musician departing the orchestra at the end of the summer is third/utility trumpeter Stéphane Beaulac.

The Quebec native joined the LA Phil in 2014 after having been Solo Trumpet of Montreal’s Orchestre Metropolitain, and he will soon be returning to his previous position for purely personal reasons..  He has been a strong addition to the section and has been well-regarded by other brass players.

[UPDATE (Oct 13, 2017):  Paul Stein, longtime 2nd violin player with the orchestra, also retired at the end of the Bowl season.  He did so without any announcement]

All  four musicians will certainly be missed.

New string players and other news

As anticipated, bassists Ted Botsford and Jory Herman have joined the LA Phil and were added to the official roster last month.  Two new violinists have also joined the orchestra, with a third still on the way:

Meanwhile, the brass section is still missing an Associate Principal Horn and a Second Trombone.  Marcel Sobol, solo horn of the WDR Funkhaus Orchestre, served as guest Associate Principal for the first three weeks at the Bowl and was the most noteworthy stand-in.  No word yet on exactly when auditions will be held; apparently, but priority has been given to finding a new Principal oboe and everything else will be pushed back to winter and spring.

One thought on “Comings and goings at the LA Phil (Summer 2017 edition): Details on Ghez, Dennis, Hooten, and others (UPDATED)”