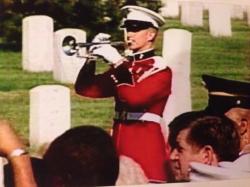 For Memorial Day 2018, I offer this video of a 2016 performance by the US Marine Band (“The President’s Own”) featuring soloist Thomas Hooten, Los Angeles Philharmonic Principal Trumpet, playing an arrangement of “With Malice Toward None” from the John Williams soundtrack to the movie Lincoln.

Mr. Hooten was a member of the US Marine Band before embarking on his very successful orchestral career, so it was particularly rewarding to see him return as a soloist in front of his former colleagues.  In my 2015 interview with him, he remembered the impact those years had on him:  “It put things in proper perspective. One day you’re playing the Tomasi concerto and the next day you’re playing a funeral for someone who just died in Afghanistan.”

Before celebrating the rest of your Memorial Day, please enjoy this recording as you say a prayer of thanksgiving to all of those who have made the ultimate sacrifice for our country.