The biggest – and least surprising news – is that Chad Smith was recently promoted from Chief Operating Officer to Chief Executive Officer. The announcement of his promotion came exactly 15 days after his predecessor, Simon Woods, abruptly announced his resignation from the position.

What to make of this? First, this is good news overall.

Is there anything about which people should be concerned? Two things jump to mind:

I hope that the pendulum doesn’t swing too far one way or the other, and that Mr. Smith shows as much concern for maintaining and achieving the highest quality of music making on stage as is possible from our world-class LA Phil musicians as he is for making programmatic splashes, all while maintaining the orchestra’s fantastic financial health. Best of luck to him.

One final question with regards to the change in CEO: why wasn’t Simon Woods the right fit?

The answer to that is tough to know for sure. By all accounts, he seemed to have the right pedigree, demeanor, and track record for the job. He had a winning personality in his own right, and was generally well-regarded. He didn’t present himself any different towards the end of his short tenure than he did upon being named to the job. 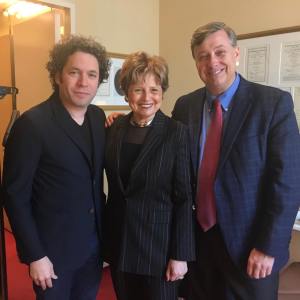 That said, it’s reasonable to guess that given Mr. Smith’s rapid investiture, the Board knew that a change was coming, and that compared to Mr. Smith, Mr. Woods was not ______ enough. Fill in the blank with whatever word(s) you see fit; here are some of the options I’ve heard from many in and around the organization: (a) bold, (b) strong, (c) visionary, (d) programming-focused, or (e) inspirational. To paraphrase an exchange I had with one of Mr. Woods’ admirers after news of his resignation came out, he seemed more in awe of the orchestra and the organization than they were of him.

That’s an unfortunate turn of events if it were, in fact, an underlying reason for he and the orchestra to part ways, but upon hearing those opinions, I was reminded of a few statements Mr. Woods made to me during our interview earlier this year:

In the context of statement, those after-the-resignation assessments seem consistent.

Regardless of whatever disagreements or differences may have existed between Mr. Woods and the Board, he seems to be a genuinely good man, with a keen understanding of the classical music business overall, and a passion for music and music making. I have no doubt that he’ll find future success in the near future, and we wish him well both personally and professionally.

Emmanuel Ceysson, Principal Harp of the Metropolitan Opera Orchestra since 2015, will be the new Harpist of the LA Phil. The native of France won the audition this past week and will take over some time after Lou Anne Neill, an LA Phil veteran who was originally appointed to the position in 1983 by Carlo Maria Giulini, retires.

Prior to joining The Met, Mr. Ceysson had been Principal Harp of the Orchestra of the Opéra National de Paris since 2005 when he was named to the position at the tender age of 22. He also has a noteworthy solo career, complete with recital tours and recording releases.

He will be the fourth former member of The Met Orchestra to have joined the LA Phil in the past decade, following Whitney Crockett (Principal Bassoon), Denis Bouriakov (Principal Flute), and Boris Allakhverdyan (Principal Clarinet).

LA Phil Principal Oboe: a new candidate emerges, plus what happened to the last one?

This past May, the orchestra held an open audition to fill its Principal Oboe chair, the same one that Ramon Ortega vacated after a very brief tenure. Four musicians – all American-trained oboists — made it into the final round. Only one – Liam Boisset – made it out of the audition with an invitation to play a trial with the orchestra.

He is, in most ways, the unlikeliest of candidates. The three other finalists currently hold principal positions in other large orchestras, while Mr. Boisset, still in his mid-twenties, doesn’t yet have a full-time orchestra job of any kind and has been splitting time as of late between the Bay Area and New York as a bi-coastal freelancer.

That said, the San Francisco native’s candidacy isn’t a complete surprise. Word on the street is that during the 2017 auditions that resulted in Mr. Ortega being awarded the job, Mr. Boisset was one of the other finalists. Moreover, he has been guest principal with the Metropolitan Opera Orchestra, the St. Paul Chamber Orchestra, and the Calgary Philharmonic, so he knows his way around the first chair of an oboe section. He has also been a guest section player with the New York Philharmonic, the Philadelphia Orchestra, and the San Francisco Symphony, and he has appeared as a soloist in the Strauss Oboe Concerto with the Las Vegas Philharmonic.

He played with the LA Phil under Gustavo Dudamel over two weeks this past summer: the first at the Hollywood Bowl in Mahler’s 2nd Symphony, a reprise of John Adams’ new piano concerto, Must the Devil Have All the Good Tunes? (Yuja Wang, soloist), and the Symphony No. 4 of Tchaikovsky; the following week he played the same concerts on the road when the orchestra made its appearance at the Edinburgh Festival.

No decision one way or the other regarding his candidacy was made at that time, though word on the street is that he’ll be returning to play additional concerts with the LA Phil this calendar year. Again, no other candidates are currently being considered for the position.

Best of luck to Mr. Boisset and the orchestra.

As welcome as this news is, the big question about the Principal Oboe chair remains: why did Mr. Ortega leave?

After arriving with much fanfare – and some scoffing among a certain group of American oboe aficionados – the heralded Spaniard returned to Europe less than a year after being named to the top oboe posts at both the LA Phil and the Colburn Conservatory.

His stint as faculty member at Colburn was roughly two-thirds of a year, beginning in earnest when he auditioned players for his oboe studio in May. His official tenure as Principal Oboe with the LA Phil was even shorter, lasting from the end of September 2018 to mid November. Almost a decade ago, some people were incredulous when Mathieu Dufour left his post as Principal Flute in LA at the beginning of the 2009/2010 season after roughly four months; Mr. Ortega’s tenure was less than half that.

Two days after news of his resignation broke, the star oboist posted this diplomatic yet vague explanation to his Facebook account:

Dear everyone,
After hearing so many wrong comments about why I have resigned on my position with the LA Phil, I would like to write that, on my case, there is not only one reason why I have decided this way. Anyone who lives such an experience will understand that.
I would love to thank the LA Phil for a marvelous time these past months. It is an experience I will never forget.
I am specially [sic] grateful to my colleagues on the wind section, maestro Dudamel and all LA Phil staff who have just supported and made me have a great time in LA!
I am very sad that it lasted so short, but that is life. I ask for respect on my personal motives.
I wish the LA Phil the brightest future and all the best on their 100 anniversary season.
They are a fantastic orchestra and I will truly miss them.

So what could these multiple reasons be?

Only Mr. Ortega knows for sure, and he didn’t respond to requests for additional comments. Here are my own educated guesses as to potential reasons (along with my guesstimations about the likelihood of each one actually contributing to his decision):

One final tidbit on matters regarding the LA Phil and oboists: the much-anticipated recital and tour debut of the “Los Angeles Philharmonic Wind Quintet” in Australia went off splendidly by all accounts, with Principal Horn Andrew Bain and Messrs. Bouriakov, Allakhverdyan, and Crockett being joined by Ricardo Barbosa, Principal Oboe of the Sao Paulo Symphony Orchestra (despite the press photos for the event still showing Mr. Ortega in the ensemble). The program included:

A recording of the concert is available to be streamed online HERE. I highly recommend that you listen to it. It’s absolutely wonderful and well worth your investment in time.

In addition to the aforementioned auditions for oboe and harp, the LA Phil also held auditions to fill three open violin chairs. Two of them have been filled by:

There’s also been one departure from the cello section: Tao Ni left the orchestra at the beginning of the summer season. No word on the reasons for his departure, and no indications as to him having joined another orchestra. It’s worth noting that he originally joined the LA Phil as Associate Principal Cello, though after a year, he was only given tenure as a section player (Ben Hong was eventually promoted from Assistant Principal to Associate Principal); perhaps he has ambitions for more of a leadership position within an orchestra or maybe even a non-orchestral career of some sort. In any case, we wish him well in all of his future endeavors.

A growing leadership vacuum at LACO

Over at the Los Angeles Chamber Orchestra, there’s well-deserved enthusiasm over the start of Jaime Martin’s tenure as Music Director (my review of their season-opening concert is coming later this week).

At the same time, the orchestra has major holes to fill in its administrative ranks as its top three executives have left in the past year:

Those are three major positions to have to fill, especially in the midst of having a new Music Director whose never led an American orchestra learning the ropes. Things will undoubtedly be challenging until they can add some horsepower back to their team.

Fortunately for LACO, they have Ruth Eliel and Leslie Lassiter stepping into the breach — at least temporarily — as co-Interim Executive Directors. Ms. Eliel was LACO’s Executive Director from 1997 to 2008, and her 11-year tenure has been rightly hailed as a triumph, helping bring the organization back from the brink of disaster and putting it back to artistic and fiscal health. Ms. Lassiter is Chair of LACO’s Board, and has a long career as a successful banker to go along with many years in philanthropy.

Here’s hoping that LACO finds some great arts administrators quickly and that they can maintain the positive momentum that LACO has had since Ms. Eliel’s original tenure.

4 thoughts on “Comings and goings at the LA Phil and beyond (Fall 2019 edition): new CEO, harp, and violins; a Principal Oboe update; plus much more”