Long before the closure of Interstate 405 allegedly threatened to end the world as we know it, I had planned to spend this past weekend with family and friends in Las Vegas.  High temperatures were a surprisingly mellow 98-degrees in the shade,  so days were spent outside at the Mandalay Bay lazy river with cold drink in hand; evenings involved praying for “hard eights” at the craps table, comparing the subtle differences between various potato vodkas at Red Square, and finding out that our neophyte blackjack dealer at the Playboy Club was Miss December 2005 (more on all that below).

Back in Southern California, Gustavo Dudamel and the Los Angeles Philharmonic spent this past weekend playing Turandot and trying to find a new Principal Trumpet.  If I could have placed a bet on who would have won the auditions, I would have put my money on Thomas Hooten.  Turns out, it would have been a smart and profitable wager:  Mr. Hooten was awarded a trial with the orchestra.

I haven’t heard Tom Hooten play live (yet), but those who have describe him as a monster player and absolutely rave about him for having a huge sound,  ravishing tone, and bullet-proof technique.  His reputation is certainly matched by his impressive resume:  after stints, in “The President’s Own” U.S. Marine Corps Band and Indianapolis Symphony, Mr. Hooten won auditions in 2006 for Principal Trumpet in both Houston Symphony and Atlanta Symphony in rapid succession; he accepted the Atlanta job and has played to glowing reviews ever since.

I can’t imagine his current orchestra will give him up without at least a little bit of a fight.  Just this past May 2011, Mr. Hooten was named the inaugural recipient of the orchestra’s Mabel Horn Reeder Chair which, according to the Atlanta Symphony:

“. . . demonstrates excellence in musical artistry, leadership, collegiality and community engagement. The chair may be granted to any tenured orchestra member, including those who already occupy a named chair. Recipients will be awarded a one-time $10,000 stipend at the start of their five-year term as the honoree, to be utilized for professional development. The award will be celebrated every five years.”

Pure speculation on my part:  perhaps this was a preemptive incentive to keep one of their star players from leaving for other environs.

How much this will — or will not — factor into a possible move to Los Angeles remains to be seen.   I certainly hope that he ends up getting the offer for the job permanently, and that if/when he does, he chooses to accept it so that I can hear him with the local band at Walt Disney Concert Hall. Perhaps in the meantime, I’ll get the opportunity to hear him during his trial with the orchestra, whenever that is, or perhaps I can coordinate a business trip to Georgia with a visit to the Woodruff Arts Center.

(UPDATE: According to Peter Ruhe’s recent blog post at ArtsCriticATL.com, the Reeder Chair appointment was an attempt by the Atlanta Symphony to let their current Principal Trumpet player “feel the love” from the orchestra; however, even with genuine mutual admiration between him and the orchestra, Mr. Hooten seems to want the LA Phil chair if it were offered to him)

Here is Mr. Hooten playing Chronicles by Joseph Turrin with the United States Air Force Band (NOT the Navy Band as listed on the YouTube titles): 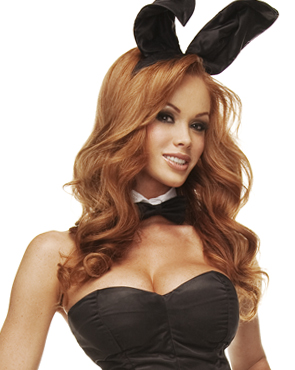 Meanwhile, back in Las Vegas . . . I’ve spent quality time at The Playboy Club at the Palms Hotel & Casino on a number of occasions. It has a great vibe, with a nice mix of music played at reasonable volume filling a space that includes a small dance floor and couches on one end, a separate bar and lounge at the other, and in the middle, two pits worth of gaming — all blackjack tables save for one roulette wheel — where the dealers  and cocktail waitresses happen to all be dressed in iconic Playboy Bunny regalia (I guess bunnies don’t know how to handle a craps table).  Best of all, I get in for free, so there is no reason to NOT gamble there.

For all of the folklore surrounding Las Vegas as a veritable grown-up playground, there is nothing that crystallizes that notion more than having a beautiful woman dressed in that famous uniform stand behind a blackjack table, bopping to DJ Khaled’s “All I Do Is Win” while she simultaneously helps you lose your money in $25, $50, or $100 increments.  My experience has been that despite looks and wardrobe straight from a James Bond movie, the Bunny Dealers are competent professionals who are as efficient at shuffling, turning cards, and counting to 21 as any grizzled Nevada veteran or Macao transplant might be.   They might be dressed as Bunnies, but they are dealers, not Playmates:  the image is a beautiful veneer covering a common gaming machine.

This time around, I was joined by a friend and Playboy Club rookie whom we will call “Mr. J.”  He had heard of the famed Playboy Club and wanted to see it for himself.  I was happy to take him, but warned him not to expect an actual Playmate to be sighted anywhere in the vicinity.  After re-setting his expectations, the two of us made our way up the elevator and through the maze that the Palms puts you through to get to the club.  Finally, we sat down at the first empty table we found, placed our bets, and began to play.  The woman behind the table  began to deal the cards, and within a few minutes, I noticed that there was no name embroidered on her cuffs as is typical with Bunny Dealers (click HERE and see the left wrists of the ladies in this picture):

I looked over at Mr. J, and his look was one of no less than shock and awe:  he instantly got a school-boy grin on his face and turned sheepishly quiet, his Vegas myth turning into unexpected reality.  After a few more minutes, I was equally shocked and awed:  not only was Miss December dealing me and my buddy a private game of blackjack, I had actually doubled my money.   This was clearly too good to be true.

Of course, it was.  Just as we were settling in for a long night of pre-pubescent-level fantasy, the Vegas powers-that-be abruptly put a grinding halt to it all:  a different bustier-clad and cotton-tailed dealer took Miss December’s place, and as typically happens, we began losing.  Quickly.  Alcohol may have been impairing our judgement, but we were not so far gone as to ignore the obvious sign than it was time to go.  We took what money we had left, got up from the table, and started to make our way towards the exit — but not before getting our original Bunny Dealer to take a picture with us.  Given the limitations being placed on his memory from an evening’s worth of vodka tonics, Mr. J at least had something tangible to help him “remember” his experience, school-boy grin intact.

The next day, some quick Google work revealed that our dealer was indeed Christine Smith, Playboy’s Playmate of the Month for December 2005.  Don’t know how much longer our friends at the Playboy corporate offices plan to have her gracing the felt tables at Palms — whether this was a permanent offer, a trial, or a merely a stint as guest principal, I don’t know.   But just as I am hoping to see Mr. Hooten regularly here in Los Angeles, I am also hoping to see Miss December — um, I mean, Miss Smith — whenever I visit Las Vegas.

5 thoughts on “News of Mr. Hooten and Miss December: how the LA Phil may have found a new Principal Trumpet and CKDH a new favorite blackjack dealer”