All Reviews / Music News & Info: Classical / New York / Other classical music concerts and recitals (in So Cal and beyond) / Reviews 2011/2012 / Travel 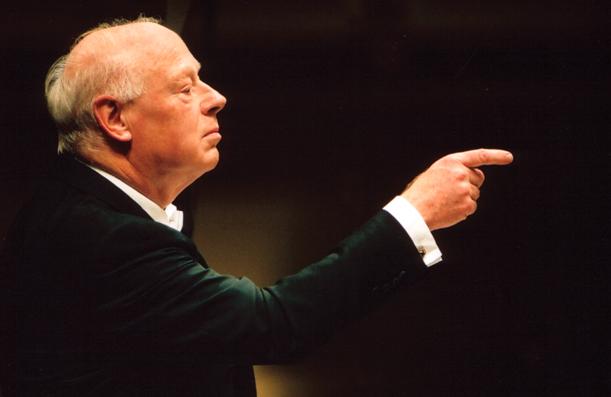 As previously mentioned, I made a “game day decision” last Saturday night to see Bernard Haitink conduct the New York Philharmonic at Avery Fisher Hall.  Note that I listed Mr. Haitink’s name first, then the orchestra, then the hall:  chalk up the opportunity to see the legendary Dutch conductor in person for the first time as being the primary draw for me.  He could have been conducting John Cage’s 4’33” and I probably still would have paid money for it; lucky for me,  the not-quite-warhorse “Pastoral” Symphony of Beethoven was on the bill, paired with Strauss’s Don Quixote.  Overall, it may not have been the most exciting or groundbreaking concert, but it was enjoyable nonetheless.

Mr. Haitink’s take on the Beethoven 6th was, in most ways, middle-of-the-road:  dynamics were  never extreme, tempos never dragged or felt rushed.  Nothing was out of place.  It was a tidy performance.  And yet, it was more than that.   He paid attention to details, brought out colors and instrumental phrases that I hadn’t noticed previously.  It was exactly the kind of performance I was expecting and hoping for from this conductor. I couldn’t help but wonder how much more enlightening it would have been in a better hall than Avery Fisher.  (There, I said it.)

Avery Fisher Hall (AFH) has never been one of my favorite orchestral venues,  though I never thought that it is quite as awful as some might make it out to be.  For all my previous visits to see the NY Phil at AFH, I had always been in one of the various Tiers and near the back of the hall since those afforded better views of the orchestra and the sound quality was allegedly “best” there.  This time around, I made a point of getting seats in the orchestra section just to see how different it sounded.  I have friends that make a point of sitting in the orchestra section at NY Phil concerts, and many online comments seem to favor the floor seats.   As it turned out, my orchestra seat was pretty much dead center of the hall, both front-to-back and side-to-side; they were definitely very different, but not better, than seats in the Tiers.

In my Row Y seat,  there was certainly more immediacy to the sound that favored individual instruments over blend; however, it did not feel intimate.   Balances were way off.  In tutti passages, the strings — especially lower strings — would get lost in a haze of fuzziness once woodwinds and brass would kick in.  Percussion sound was especially dull; the wind machine in the Strauss more seen than heard.  Regardless of instrument, resonance and richness was missing, as if someone had flipped a switch and turned off the overtones in the orchestra’s sound.  The fourth movement storm in the Beethoven sounded tame; how much of that was due to inadequacies of the hall vs. the conductor’s restraint, I can’t be sure, but it was a disappointment nonetheless.

At least in my previous AFH seats in any of the Tiers, the blend was even and the sound more flattering to the orchestra as a whole, similar to the sound in the Orchestra or Loge section of Dorothy Chandler Pavilion.  Yes, the orchestra sounded like it was playing from behind a blanket, but at least it was a single blanket for the whole orchestra, not various ones tossed around willy-nilly on some sections but not others.

It is a shame because despite the handicap presented by the hall, the NY Phil is unquestionably a fine orchestra.  This was especially clear in the Don Quixote played at the beginning of the concert.  Principal Cello Carter Brey entered the stage alongside Mr. Haitink, and played the lead character in Strauss’s tone poem as magnificently as you’d expect.  His technique was spot on, his tone was warm, and his interpretation full of emotional and sonic range.  Principal Viola Cynthia Phelps, credited as a soloist but playing the part of Sancho Panza from her usual seat at the front of the section, sounded equally impressive when you could hear her.  Principal Oboe Liang Wang’s beautiful playing and nuanced timbre cut through all sonic obstacles put before it.  Most impressive were the trumpets and trombones, led by legendary principals Phil Smith and Joe Alessi.  Their sound has a richness and clarity that I always find stunning, no matter how many times I’ve heard it before, and the depth of tone they elicit from their respective sections is quite impressive.  This was in stark contrast to the horns, which blatted about throughout the whole evening and seemed completely out of whack; even if one were willing to overlook a minor clam here or there, blend within the section was lacking, pitches were questionable, and most of all, balance with the rest of the orchestra was all wrong, as if they could only play with amplifiers turned to eleven.  Even Principal Horn Phil Myers’ respectable solo work couldn’t redeem it.

All in all, though, it was enjoyable evening.  I really look forward to seeing how different the NY Phil will sound with their music director, Alan Gilbert, at the helm when they visit Walt Disney Concert Hall next spring.  I also hope that Mr. Haitink can be coaxed out to the West Coast to conduct the Los Angeles Philharmonic.  Not sure when the last time was that he conducted the local band, if at all, but it would be a pleasure to have him out and see what rewards his moderate, detail oriented leadership would yield.

4 thoughts on “Thoughts on Haitink, the New York Philharmonic, and Avery Fisher Hall”