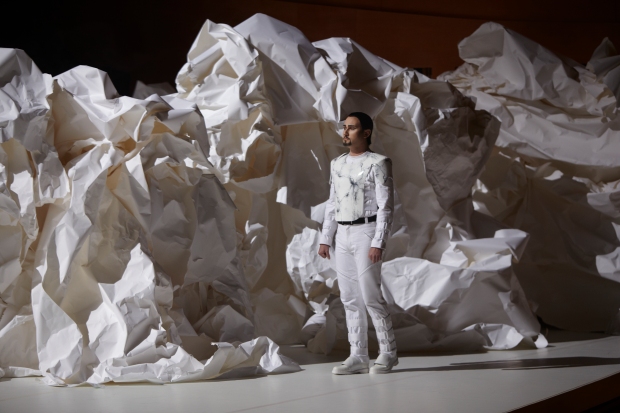 It was not your average Sunday afternoon at Walt Disney Disney Concert Hall.  Gustavo Dudamel was still on the podium for the Los Angeles Philharmonic’s unofficial Mozart Month, but that was pretty much where “business as usual” ended.  The LA Phil had decided that their first-ever complete performances of Don Giovanni would be full-blown productions, not mere stand-and-sing concert versions of Mozart’s opera.

As if that weren’t enough, they:

The result was high in style and substance, sounding very good and looking stunning.  It wasn’t a complete triumph, with some aspects which were quirky and frustrating, but you had to appreciate and be impressed by the overall effort.

The WDCH stage was set so that most of the risers were flattened and covered in white to create space for the action.  Mr. Gehry’s heavy paper “installations” for the stage created a crinkly white landscape for the cast to walk between and hide within.  These were punctuated with four moveable rectangular blocks varying in height between about three- and twelve- feet, on and around which the majority of action occurred.  Behind and about four feet above the white theatrical stage was the orchestra, filling the space where the central choir benches normally reside, with similarly crinkled paper — this time black — covering the back walls, and black fabric covering the extreme sides where some choir benches remained for use by the small contingent of the Los Angeles Master Chorale.

The rough textures and stark black and white colors were an arresting visual contrast to the the warm wooden interior of WDCH, creating an other-worldly setting.  The mostly black and white costumes designed by the Mulleavy sisters matched the setting and added to that atmosphere, and when combined with the very black or very white hair & wig designs of Odile Gilbert, gave the whole production a “Star Wars stormtrooper meets post-modern vampire” look and feel (though the undead Commendatore looked like a dead ringer for Sauron from Peter Jackson’s Lord of the Rings).

Each of the women was given a distinctive look:  jet black inlaid with Swarovski crystal for Donna Elvira, flowing white for Donna Anna, a pixie-ish lavender number for Zerlina (somewhat ironically not in a typical bride’s white).  In the second half, the looks were altered:  Donna Elvira had a subtly different black dress, Zerlina looked to be a in a slight state of dishabille, and Donna Anna’s formerly pure white dress dramatically streaked in blood-red.   It was quite a visual feast.

In contrast, the men (save for the Commendatore) looked largely generic, with very similar white pants, shoes, shirts, and mottled grey breast-plates.  If not for hair color and slight differences of build, they were difficult to tell apart, almost becoming interchangeable.

In many ways, this mirrored Mr. Alden’s conception of them — even if they hadn’t bed thousands of women a la Giovanni, they were all really the same one-dimensional character without much redeeming quality. In fact, there was little-to-no evolution in any of characters in Mr. Alden’s world, regardless of the emotions about which they may have been singing at any particular moment.   The storytelling therefore was stunted and a bit incongruent, with Masetto’s rather striking final interaction with Zerlina particularly curious.

Where Mr. Alden’s ideas worked better were on the small scale, scene by scene, interaction for interaction.  It was oddly compelling to watch Donna Anna pining for Don Giovanni despite just having been assaulted by him and while simultaneously acting reticent towards her fiance, Don Ottavio.  So too was Zerlina’s charming but odd solo dance turn around a stoic cast near the end of the first act.   The characters’ movements and placement throughout the stage were well thought-out, even clever, and made the most of Mr. Gehry’s set design.  Characters often were asked to move in a stylized slow motion, sometimes remaining perfectly still (occasionally in some awkward positions for singing).  It all made the instances of normal-speed action more striking in contrast, all of which combined to heighten the drama. Of course, regardless of how good it may have looked, it wouldn’t have worked unless the singers and musicians did their part, and in this regard, there was a great deal to admire.

Most of all, you can’t have a successful Don Giovanni without a strong lead  inhabiting the title role, and the LA Phil had an ideal one in Mr. Kwiecien.  The Polish baritone has a powerful voice with a rich tone, not to mention an athletic stature and build, all of which he brought to bear to create a menacingly suave portrayal of the Don.  Kevin Burdette’s Leporello served as a perfect foil, showing great comedic physicality and timing, and in doing so, bringing a bit of much needed humor to an otherwise deadly serious production.  Vocally, he met every hurdle thrown his way — including singing while lying on his stomach — with aplomb, and his Catalog Aria was characterized perfectly.

The women also were all very nicely cast.   Of the three, my favorite by the end of the night was Aga Mikolaj singing Donna Elvira.  She displayed a sumptuous voice that could be blustery or tender as needed, while imbuing her role with just the right mix of anger and desperation (it appears she had gotten over whatever vocal ailments other writers noted from Friday’s performance).  Anna Prohaska gave Zerlina an appropriate naivité, her lighter voice still able to sing beautifully over the orchestra without ever getting overwhelmed by it or sounding harsh in the process.

Carmela Remigio was a technically impressive Donna Anna, effortlessly hitting all vocal runs and high notes, but while she displayed some breadth of emotional range in her acting, there wasn’t enough range of emotion reflected in her singing.  She was matched on all of those attributes by Pavol Breslik, a vocally impressive but unconvincing Don Ottavio.  Of course, both of them could have been merely following the speak-one-way-but-behave-another concept of the director, but I can’t be sure. Rounding out the cast, Stefan Kocan was booming Commendatore, while Ryan Kuster’s Masetto was earnest and capable, if a little underpowered.

Cast of Don Giovanni, with the LA Phil behind them^

Mr. Dudamel’s pacing was generally on the slower side of average without being outright slow, momentum always more than sufficient.  His textures were relatively thick, even in quieter moments, and when climaxes came in both acts, he pushed them loud and hard without ever allowing the sound to become bombastic.   This was certainly anticipated, as was the fact that it worked better with this opera than it did various times in the past when he conducted some of Mozart’s symphonies.  The orchestra itself sounded great.

The biggest musical challenge was in the placement of the LA Phil behind the singers.  A video feed beamed Mr. Dudamel’s conducting gestures to TV monitors located strategically throughout WDCH so that the singers could follow along.  But while they could respond to him, it was a lot more difficult for him to respond to them since he had no way to watch them.  This one-way visual contact likely limited the spontaneity which is often a hallmark of Mr. Dudamel’s concerts, not to mention contributing to some occasional lack of rhythmic coordination between singers and orchestra.

In the end, the positive aspects of the performance outweighed the annoying ones, and the net result was a production for which the LA Phil can be rightly proud.  They were willing to be bold, in keeping with the orchestra’s collective personality,  and in doing so, made for a stimulating concert-going experience well beyond your average Sunday afternoon at Disney Hall. 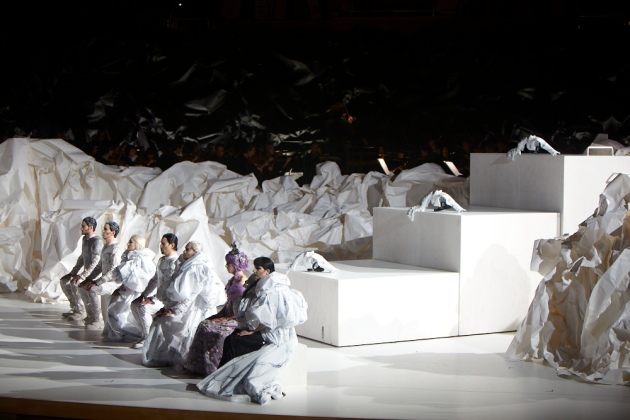 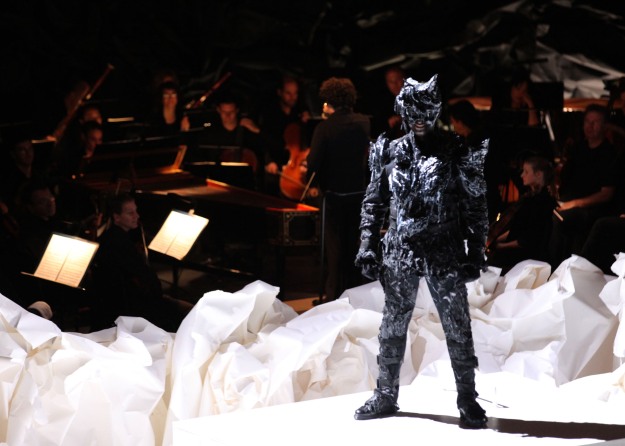