Judging by Wednesday’s final dress rehearsal at the Dorothy Chandler Pavillion (*see caveat below), L.A. audiences probably could not have asked for two more completely different and yet equally valid interpretations of Mozart’s great work within a couple years of each other, yet here they were mere months apart.  For those who were turned off by the stylized psycho-sexual machinations at Disney Hall earlier this year, this old-school rendition will be most welcome. 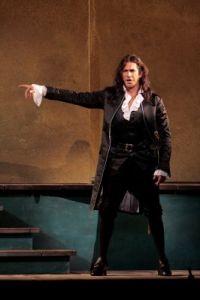 A good Don Giovanni (the opera) always requires a good Don Giovanni (the character), and LA Opera is fortunate to have a very good one in Ildebrando D’Arcangelo.  His richly hued voice and matinee-idol good looks commanded the stage, and he gave The Don a smarmingly smooth persona that made his many, often unlikely, seductions mostly believable.

David Bizic played Leporello with a wonderful comic sensibility, and sang  his Catalog Aria with aplomb, adding a nice mix of matter-of-factness and silliness to the listing of his master’s many conquests.  There was excellent chemistry between the two gentlemen throughout the evening, both vocally and dramatically, and Mr. Bizic made Leporello a credible hapless sidekick to Don Giovanni despite being larger in stature than Mr. D’Arcangelo.

Julianna Di Giacomo (a Santa Monica Native) and Andrej Dunaev were vocally well matched in their company debuts as Donna Anna and Don Ottavio, with both having various times to shine individually:  Ms. Di Giacomo sounding particularly lovely in “Or sai chi l’onore,” and Mr. Dunaev coming into his own in the ensuing “Dalla sua pace.”  Finnish soprano Soile Isokoski was an earnest and technically solid Donna Elvira.

The lovely and charming Roxana Constantinescu was an ideal Zerlina, with vocal characterizations and pouty flirtations that imbued the young bride-to-be with a perfect sense of youthful innocence.    Joshua Bloom was her capable if non-descript Masetto.   Ievgen Orlov was the appropriately stentorian Commendatore.

All were supported by stellar work from James Conlon and the orchestra.  The LA Opera Music Director gave the score energy and propulsion, while still being sensitive to the singers on stage.  Transparency abounded, and there were many times that the conductor brought out details I hadn’t previously heard in the score.

Overall, the cast acted each of their respective characters convincingly, though they weren’t asked to do very much by director Gregory Fortner.  Most of the singing was done standing in one place, and the action was secondary to the music.  There was little to no attempt at exploring any dramatic depth, and the irony was only present if it was obvious in the libretto; each character’s motivations were simple and straight-forward.  The costumes by Moidele Bickel were generally period in style, though some choices seemed a tad odd:  Leporello resembled a cowboy in a prison orange jumpsuit, and the Act 1 masqueraders seemed like dead ringers for characters in Peter Shaffer’s on-screen Amadeus.

If there was one disappointment, it was with the sets designed by Ferdinand Wögerbauer.  While functional and bright, they were  downright sparse and seemed dated and old-fashioned,  with “special effects” in the opera’s climax that weren’t very special at all.  One certainly expected something better, even for a traditional production.

That said, Don Giovanni is pretty hard to screw up, and the sets proved to be the only speed bump in an otherwise enjoyable presentation of what many consider to be the world’s greatest opera ever.  This latest version by LA Opera will easily please anyone looking for high quality singing and acting in this Mozart masterpiece.