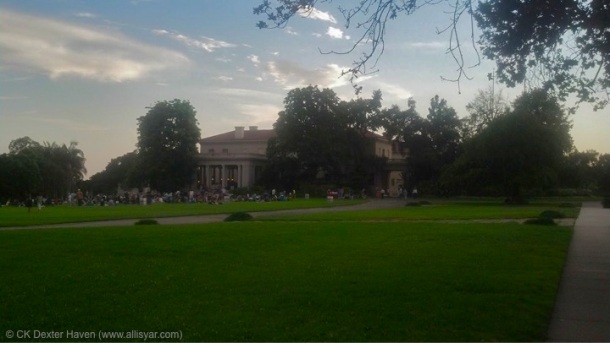 Inspired by the centennial of Pasadena-native, Julia Child, Southwest Chamber Music has been focusing  on French music for their Summer Festival 2012 at The Huntington.  Healthy portions of Debussy and Ravel are offered up in each concert.  This past weekend’s programs, the third in the series, paired those two quintessential French composers with works from Vietnam.

It was a natural twist.  Not only have the two cultures long been intertwined due to colonial influences, Southwest has made an ongoing effort to build a relationship with and champion Vietnamese musicians, most notably through the 2010 “Ascending Dragon” Music Festival and Cultural Exchange in conjunction with the U.S. State Department (the largest ever of its kind)  and their inaugural “LA International New Music Festival” held just a few months ago.  Moreover, the music of both Debussy and Ravel is filled with Eastern influences.

That mix of music, combined with the rather balmy evening and views of palm trees in the distance peeking through behind the performers, gave the whole affair an appropriately tropical, exotic feel to it.  As Momma once famously declared, “The night was sultry.”

The Sonata for Flute, Viola, and Harp by Debussy opened the concert.  The quirky, yet enjoyable, piece bridged the gap between Europe and Southeast Asia and provided a nice set-up for the whole evening.  Lisa Edelstein played the prominent flute part with a sense of mystery and oriental flair, with a rich-textured and nuance-filled playing also coming from Luke Maurer (viola) and Alison Bjorkedal (harp).

The centerpiece of the evening was the return visit of Vân Ánh Vanessa Võ, a virtuoso of traditional Vietnamese instruments who most recently appeared with Southwest as part of their first LA International New Music Festival.  Those May performances were an ear-opening tour-de-force, showing off Ms. Võ’s incredible technical mastery on a number of instruments — especially the dan bau (a Vietnamese monochord).  “Mesmerizing”  was how I described it at the time. 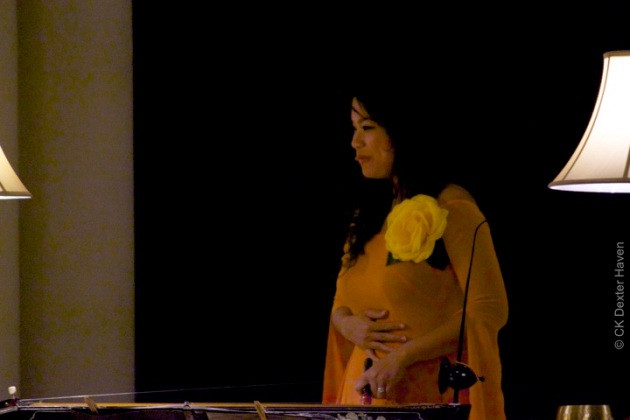 Ms. Võ’s performances this time around were less showy and attention grabbing, and instead more subtle.  She first played two solo works, both her own compositions based on traditional Vietnamese folksongs.  Music from Huế for dan bau, is based on melodies from Southern Vietnam; the second, Three Mountain Pass, inspired by the chầu văn style from North Vietnam, featured Ms. Võ singing lyrics by poet Hồ Xuân Hương as she accompanied herself with a small gong and tuned “singing bowls.”  Both works had ethereal, other-worldly qualities, and both were brief:  before you could start to wrap your head around them, they were done.

Next was Ascending Dragon, a work written by composer Pham Minh Thành in 2010 for Southwest’s music and cultural festival of the same name.  It features dan bau and Vietnamese percussion alongside a small string ensemble playing a single slow/fast/slow movement inspired by Buddhism.  Mr. Thành intended that “the usage of dan bau as the soloist will create the voice and the peaceful atmosphere that one can find in a pagoda in Vietnam.”  It is first dominated by the Vietnamese instruments, seemingly detached from the Western strings playing around them in modernist blocks.  Eventually, there is a greater mixing of melodies with the strings simulating the sliding and bending of  Ms. Võ’s dan bau; Luke Maurer was particularly effective at matching his viola to her.

The final work of the night was Ravel’s String Quartet in F major.  In other settings, it can often sound exotic in its own right, but it sounded formal — almost urban — in this context and when compared to all the other works on the program.  While principals from the Los Angeles Chamber Orchestra played it earlier this year with a bit more edge, the Southwest players gave it a warmer, more spacious interpretation that was no less enjoyable.  They definitely benefitted from the Logia’s surprisingly clear and resonant acoustics, helping them to project an overall sense of balance while still allowing each individual player an opportunity to be heard and, when appropriate, shine.

Southwest Chamber Music:  August 11, 2012; The Logia at The Huntington 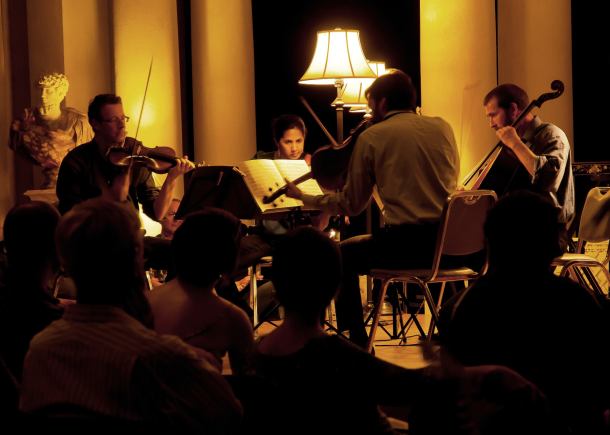