Saturday night’s Los Angeles Chamber Orchestra concert featured a first half with a rustic sensibility and a second half with an urban vibe.  Both halves were anchored by an American classic in a less-often heard rendition:

The program wasn’t billed that way, but the links were very easy to make once you heard it all.  It was a crafty move by Jeffrey Kahane, the orchestra’s Music Director and conductor for the evening, who also did double duty on the piano for the Copland and Gershwin. A packed Alex Theatre crowd responded enthusiastically, even to the lesser-known works.  It was the latest example of LACO showing off their depth and range in diverse repertoire.

Appalachian Spring was particularly rewarding.  The work was commissioned by Martha Graham, and Aaron Copland wrote the score for her dance company without knowing what the story of this particular ballet would be about; but despite the composer having made no purposeful link between his music and Appalachia, the work has become the iconic invocation of an open, pre-industrial America.

The grand orchestration that is most commonly performed offers a broad, cinemascope rendition of this ideal.  In contrast, LACO’s performance of the original version had a raw, edgy quality that seemed to more accurately reflect the bleak challenges overcome by the rural-folk and American pioneers of the listener’s imagination.  And at a time when folk-inspired musicians such as Mumford and Sons, The Lumineers, and Avett Brothers have justifiably captured wide attention of the masses, Copland’s spare-sounding chamber scoring actually felt more current. 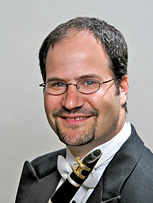 The original version of Rhapsody in Blue is somewhat more common than that of Appalachian Spring, but it is still outnumbered on concert calendars by Ferde Grofé’s full orchestration   Beginning with Joshua Ranz’s utterly sexy opening clarinet solo through the grand ending complete with gong strikes, the LACO musicians gave Gershwin’s classic a lively, even cheeky, reading.  Mr. Kahane’s piano solo work was wonderfully spirited and enjoyable, even if he missed more than a smattering of notes on the keyboard.

Dvořák’s Serenade for Winds opened the program.  Mr. Kahane led a contingent of LACO players in a wintery-feeling take that was meaty one moment and gentle the next.  Son of a Chamber Symphony proved to be a nice pair to Rhapsody in Blue, with a jazzy first movement, a second movement loaded with lush texture and technicolor orchestration, and a finale that would only be complete with the banging of a trash can lid.  Good times, good times.