A little over a week ago, David Robertson returned to the Los Angeles Philharmonic’s podium for the first time in over five years, and for the life of me, I have a hard time understanding why it’s taken so long.

First and foremost, his broad repertoire featuring impeccable credentials in 20th and 21st Century music syncs up perfectly with the orchestra’s own sensibilities.  Second, he’s visited the San Francisco Symphony multiple times since then, and you’d figure that a subsequent jaunt down the coast wouldn’t have been very difficult.  Third, he happens to be a local boy and alum of Santa Monica High School.  Finally — and this is most important — the orchestra sounds great and plays well when he conducts.

Net net, I can’t think of another conductor who would be a better candidate for more regular, even annual, visits.  His prolonged absence was even more perplexing after hearing an excellent performance of  Britten’s Four Sea Interludes from Peter Grimes, the West Coast premiere of a new piano concerto by Steven Mackey, and Ravel’s orchestration of Pictures at an Exhibition by Mussorgsky.

Most telling to me was his rendition of the well-worn Mussorgsky/Ravel piece.  From his very first time conducting the LA Phil in 1999 to his most recent visit at the helm of the two-week “Concrete Frequency” festival, Mr. Robertson has loaded his programs with challenging, even obscure, works by the likes of Ives, Lutosławski, Crumb, Milhaud, Varèse, among others.  This was my first chance to catch him doing a bona-fide orchestral warhorse.  And he did not disappoint.

These were fully-saturated Pictures for an Instagram age, sunny in disposition and unabashedly splashy in approach throughout without ever being superficial.  Darker sections (e.g. “Bydlo,” “Catacombs,” or “Cum mortuis in lingua mortua”) weren’t very ominous in absolute terms but still felt dark in comparison to the other moments, the same way an overcast 67-degree day passes for bad weather in Los Angeles.  Mr. Robertson pushed tempos a bit while still  keeping it all in nice proportion — it wasn’t until the work’s climax, “The Hut on Hen’s Legs (Baba Yaga),” did he unexpectedly ratchet back the speed, an arresting move that heightened the drama through the finale of “The Great Gate of Kiev.”

I loved it all, but frankly, I wouldn’t be surprised if it weren’t to everyone’s taste.  I remember Valery Gergiev’s brooding, angst-ridden interpretation of Pictures at an Exhibition during the inaugural season Walt Disney Concert Hall — I loved that one too, but it was the polar opposite of Mr. Robertson’s bright and extroverted take on this particular night.

The orchestra sounded terrific, not at all surprising in this showpiece.  Tom Hooten (trumpet), James Rötter (alto sax), and Jim Miller (tenor tuba) played their respective solos with panache,  the conductor seemingly willing to let them — perhaps even encouraging them to — play quite loudly. 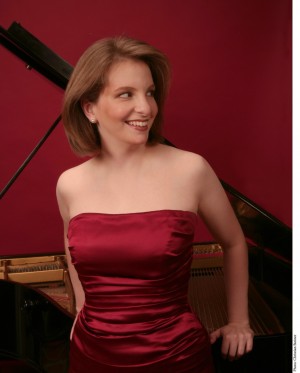 The other major work in the evening was the West Coast premiere of Steven Mackey’s Stumble to Grace, a concerto written for Mr. Robertson and pianist Orli Shaham (aka Mrs. Robertson, aka Gil’s sister) and given its world premiere by the two of them and the St. Louis Symphony in 2011.  It was inspired by the composer watching his son learn to walk, and is meant to roughly represent the evolution of someone playing the piano from being “all thumbs” (both literally and figuratively) to what is ultimately complex and sophisticated music.

Mr. Mackey also cited diverse musical influences ranging from Bach and Mozart to Thelonious Monk and Vince Guaraldi; you could certainly hear flavors of all that in the score, but it also strongly reminded me of the Ravel Piano Concerto in G, and this tied in very nicely with the Ravel-orchestrated Pictures which followed it after intermission.

Ms. Shaham was once again the soloist, and she showed off crystalline technique to go with a flowingly lyrical interpretation.  The piano part is never particularly bold or assertive, but still requires a great deal of dexterity and rhythmic precision.  Ms. Shaham played it all with apparent ease.

Overall, Stumble to Grace was easy to like:  tonal, optimistic, and fun, even in its most purposefully awkward moments — wonderfully evocative of the anxious joy you get watching your toddler take his or her first steps.  It’d be great to be able to hear it again.

The concert opened with a shimmering account of Britten’s Four Sea Interludes.  As he did with Pictures at an Exhibition, Mr. Robertson favored a colorful approach without ever sacrificing transparency.  The woodwinds had a particularly appealing chewiness in their tone.

All in all, it was a thoroughly enjoyable and inspiring evening of music.  It reinforced my desire that Mr. Robertson will be a more frequent visitor to the Los Angeles Philharmonic.  Southern California  is conveniently located along his commuting route between the two orchestras he leads, the St. Louis and Sydney symphonies, so geography shouldn’t be too much of a challenge.  And since it’s never too early to speculate about the LA Phil’s next Music Director, it’s worth noting that his current contracts with the SLSO and SSO expire in 2016 and 2018, respectively — coincidentally matching up with the end of Gustavo Dudamel’s current contract with the LA Phil.  There’s still quite a ways to go before we get to that point and who knows if/when the timing would be right, but let’s hope that the baby steps needed to eventually get there are taken.

2 thoughts on “And here’s to you, Mr. Robertson: SoCal native returns to conduct the LA Phil”