(Publisher’s note:  We’re very happy to welcome back Fiona Bryan, writer and violinist, to All is Yar for this concert review).

In the short year and a half that I have lived in Southern California, I have come to expect the unexpected when it comes to programming presented by various cultural organizations around Los Angeles. The progressive landscape of this city seems to have been ripe for a Bartók and Rachmaninoff pairing at Walt Disney Concert Hall as the Los Angeles Philharmonic with Gil Shaham and Stéphane Denève matched the Bartók Violin Concerto No. 2 with Rachmaninoff ‘s Symphony No. 2. The combination resulted in a balanced if non-traditional and unexpected program that was fun, energetic, and expansive.

I should preface my comments by saying that Bartok’s Violin Concerto No. 2 has never been a favorite piece; as a somewhat accomplished violinist, I am not ashamed to say that it was never a concerto I was comfortable with and that it stretched me in ways that were neither productive nor pleasurable. That said, I can also tell you that the saying “you are never too old” has proven true over and over for me and this is the case with my new found, if mild, appreciation for the Bartók after experiencing Gil Shaham’s performance.

Mr. Shaham was a very happy violinist on this particular Friday night. He was clearly having a great time on stage engaging with the orchestra, not just with extreme facial expression and body language but at one point physically nodding his head and talking to the first violin section. I imagine he was saying something like “alright now . . . you go . . . yeah” – it was all very jazzy and coffee house-ish for a few moments. For his part, Denève was glued tightly to Shaham throughout and was physically engaged even during the big first movement cadenza. It was thoroughly enjoyable to watch. 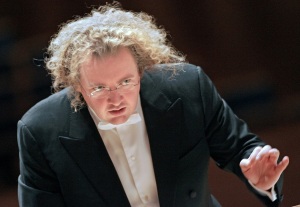 The second half of the program delivered a sustained dose of rich symphonic melody and über romance through Rachmaninoff ‘s Symphony No 2. Denève is a physically active director, his left hand a flutter one moment and up like a stop sign the next, audibly breathing, gasping and almost grunting at times. The piece as a whole was executed with clean precision despite the show from the podium.

As I listened and watched the section of 9 bass players enveloped in some of the most fantastic music written for orchestral bass (from the perspective of this violinist), I imagined they were in heaven. In many places, I could feel the solid and at times rumbled low register in my chest and throughout my limbs. The basses were so in sync that one particularly percussive section sounded so much like a single timpanist to my ear that I had to lean over to be sure of what I was hearing.