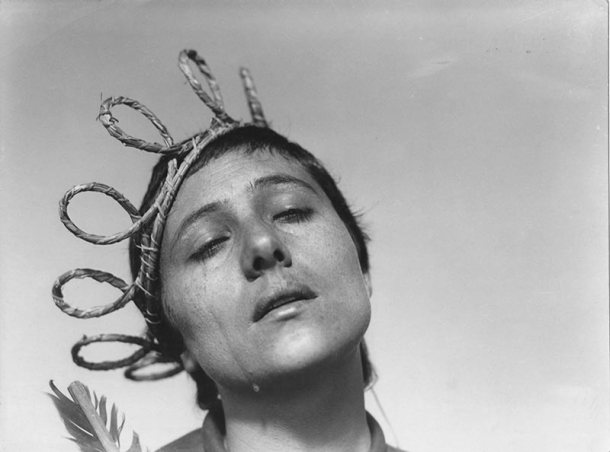 — excerpt from “The Vices of Women,” 13th Century poem, used in the libretto of Richard Einhorn’s Voices of Light

This young 2014-15 season has already seen quite a few joint presentations of film/video and music in the concert hall, with many more on the way.  It’s a concept that makes perfect sense on paper (especially in Southern California), yet hasn’t always fulfilled its promise in real life — anyone else remember the Los Angeles Philharmonic’s much ballyhooed “Filmharmonic” project which tragically sputtered into oblivion after only one season?  Yet when it works well, as it most certainly did for the Los Angeles Master Chorale’s recent season opener, it can be as impactful as any musical and/or artistic experience can be.

That concert paired Richard Einhorn’s 1994 oratorio, Voices of Light, with the work which inspired it:  The Passion of Joan of Arc, a 1928 movie directed by Carl Theodor Dreyer.  The silent film memorializes Joan’s final days, based on meticulously detailed real-life court transcripts of the The Maid of Orléans’s sham trial which led to her eventual execution.

Mr. Einhorn’s score is often performed as a stand-alone work without the film, and indeed, the Latin and French texts which form the libretto are not intended to be a literal rendering of the action on film.  When joined with the film, however, the music and words form a shadow to Dreyer’s celluloid world:   constantly linked, recognizable in shape, and complementary in movement, yet of its own evolving form, never matching the original exactly, and rarely drawing attention to itself.

The on-screen action — particularly Actress Renee Maria Falconetti’s heart-wrenching portrayal of Joan — needed no pastiche musical gimmicks.  The composer creates phrases and textures which are modern yet direct.  Sometimes, Mr. Einhorn wrote contrasting music — spare and airy — when the narrative was more tense or violent while his libretto often weaves back and forth from paralleling the film to keeping an arms-length from it.  The “Pater Noster” section, featuring two solo women singing the first few lines of the Lord’s Prayer mixed with 13th Century texts by Blessed Angela of Foligno, was particularly haunting.

Inevitably, the music becomes subsumed into the fabric of the movie, and even at its most unexpected, Mr. Einhorn’s music felt right.   It was purposeful and smart, artistic without ever being artsy.  This was no marriage of convenience like Sibelius and Lillian Gish in The Wind, no mere happy coincidence like Pink Floyd bolted onto The Wizard of Oz.  Overall, it was an absolutely stunning combination, powerful and gripping.

Much credit for the concert’s success must be given to conductor Grant Gershon.  The Master Chorale’s Music Director immersed himself in both music and film.  Though he frequently referenced a video monitor, he eschewed a typical click-track and kept the score synched with the screen based solely on his memory.  The result was a performance that ebbed and flowed organically, with Mr. Gershon ensuring that Joan’s divine inspiration as well as her anguish and despair were all deeply felt.

Throughout it all, the Master Chorale sounded glorious.  Tenor Daniel Chaney was the most noteworthy of five solid vocal soloists drawn from the LAMC’s ranks.  Cellist John Walz and flutist Heather Clark had beautiful solo moments of their own.

When it was all over, the packed house roared with approval.  Even when you expect excellence from the Master Chorale, they still manage to impress.

The next concert by Mr. Gershon and his talented singers will be Nov 16 at Walt Disney Concert Hall, featuring an a cappella program of Renaissance works.

Einhorn:  Voices of Light, with film, The Passion of Joan of Arc (Carl Theodor Dreyer, director)