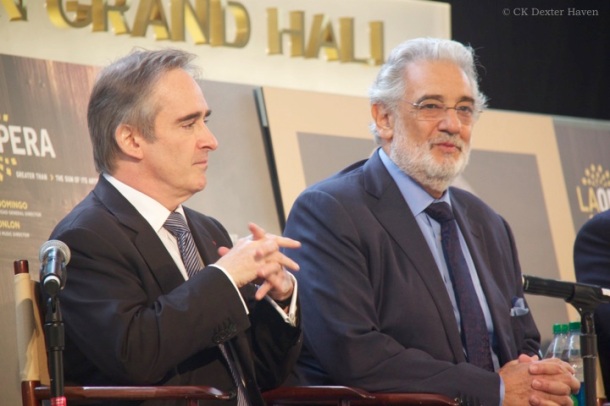 Los Angeles Opera announced today that Plácido Domingo will continue on as General Director through at least the end of the 2021/22 season.  He has held the title since 2003.  (The complete press release is below)

While Mr. Domingo certainly gives LA Opera some critical star power, I would argue that conductor James Conlon, the company’s Music Director, is just as important a hire, perhaps even more so.  He is the glue that holds the company together when Mr. Domingo is not in town (which is most of the time) and his presence ensures a level of musical excellence.  In 2013, LA Opera extended Mr. Conlon’s contract through the end of the 2017/2018 season.  I trust that all Southern California classical music fans will join me in hoping and praying that he gets his own extension as well.

Speaking of Mr. Conlon, he will be in town this coming weekend for the two-day “Recovered Voices International Symposium” at the Colburn School.  It is the latest iteration of his life-long passion for bringing to light and examining in-depth the music and art suppressed during Nazi-era Germany.  Other guests joining him include Jeffrey Kahane (LACO Music Director, pianist, and USC Thornton School of Music faculty member), Clive Greensmith (Professor of Cello at the Colburn School and former member of the Tokyo String Quartet), Alex Ross (author and music critic for The New Yorker), and many more.  Tickets are free but you must register ahead of time at the Colburn website (HERE).

(Los Angeles) October 6, 2016 — Marc Stern, chairman of LA Opera’s board of directors, announced today that Plácido Domingo has renewed his contract as the company’s Eli and Edythe Broad General Director through the end of the 2021/22 season.

“Music is my life, and my three-decade association with LA Opera has been one of the most rewarding aspects of my career,” said Mr. Domingo. “I am incredibly grateful to have taken part in the company’s many artistic achievements, and I am thankful to be able to continue leading this extraordinary opera company well into the future. I have many hopes and dreams for LA Opera, and I’m truly excited about everything that lies ahead for us as we begin our next 30 years. I am so proud to call this company home.”

Plácido Domingo occupies a unique place in the history of Los Angeles, for he has played a vital role in making the city an international cultural center. Through his direct influence and leadership, he has transformed Los Angeles from the only major western city without a resident opera company to the home of one of the nation’s most creative and respected operatic centers. He made his debut with the company in the inaugural production of Verdi’s Otello in 1986 and has performed in every LA Opera season to date. By the end of the 2016/17 season, he will have sung in more than 160 performances of 28 different roles with LA Opera and he will have conducted more than 100 total performances of 23 different LA Opera productions.

In addition to appearing frequently on the stage, Plácido Domingo has been a leading presence in the administration of LA Opera since the company’s formation. After serving first as artistic consultant (1984-2000), then as artistic director (2000-2003), he has led the company as general director since 2003. A champion of emerging talent, he created the company’s prestigious Domingo-Colburn-Stein Young Artist Program, now in its tenth season, which has fostered the careers of scores of rising performers. He is a passionate advocate for any initiative that brings opera to a larger audience, such as the live simulcasts of Macbeth on October 13, presented free of charge to thousands of viewers at South Gate Park and at the Santa Monica Pier. He has also brought the prestigious international vocal competition Operalia, which he founded and oversees, to Los Angeles on three occasions.

“This is fantastic news for LA Opera and indeed for all of Los Angeles,” said Mr. Stern. “Not only is Plácido Domingo a world-class artist, he is an inspirational figure who has made LA Opera one of the most respected opera companies in the world. All of us on the company’s board of directors look forward to many more years of close collaboration with this dynamic leader and dear friend, as we continue to push the boundaries of what an opera company in the 21st century can be.”

“Plácido Domingo was essential to the creation of the opera community in Los Angeles, with a nearly 50-year association with the city. His extraordinary impact on LA Opera’s artistic success and reputation in particular cannot be overstated,” said Christopher Koelsch, the company’s president and chief executive officer. “He has been an indispensable part of the company in every single season throughout our history, beginning with our very first production, and I am honored to continue working with him for many seasons to come.”

About LA Opera
In just three decades of existence, LA Opera has become one of America’s most exciting and ambitious opera companies. Under the leadership of Plácido Domingo (Eli and Edythe Broad General Director), James Conlon (Richard Seaver Music Director) and Christopher Koelsch (President and CEO), the company is dedicated to staging imaginative new productions, world premiere commissions and inventive stagings of the classics that preserve the foundational works while making them feel fresh and compelling.

In addition to its mainstage performances at the Dorothy Chandler Pavilion, the company explores unusual repertoire each season through the LA Opera Off Grand initiative, performed in a variety of venues throughout Los Angeles. The company also presents a robust variety of educational programming and innovative community engagement offerings, experienced by more than 135,000 people each season.

4 thoughts on “LA Opera gives Plácido Domingo a contract extension; let’s hope James Conlon is next (plus one more thing)”