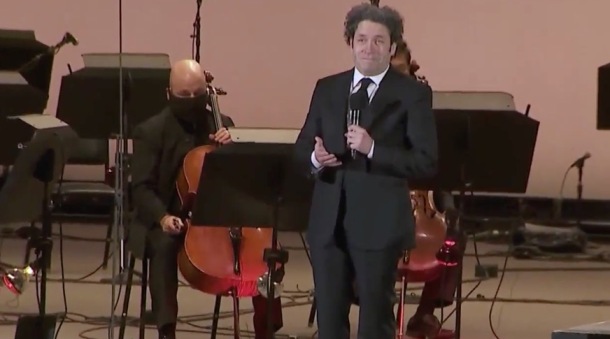 Gustavo Dudamel and the Los Angeles Philharmonic launched its 2021 Hollywood Bowl season last night with a free concert for frontline and essential workers, their first performance for a live audience in over 14 months. Those unable or unqualified to be one of the 4,000+ in attendance could enjoy a livestream of the program via YouTube, and that’s how I viewed the concert.

The reduced and socially-distanced audience was merely one atypical aspect among many. The Star-Spangled Banner did not kick-off the night. The musicians wore their winter season all-black outfits instead of their black-and-white summer regalia. There was no intermission.

Most noteworthy was the unusual sight of the orchestra reduced to a chamber-sized ensemble yet spread across the vast Hollywood Bowl stage from one corner to another. Southern California might be on the verge of returning to pre-pandemic behaviors, but local laws and regulations still mandated that precautions be enforced: strings played one person to a stand and generous spacing was kept between everyone; those not required to blow into an instrument wore masks throughout. Not an ideal situation, but they made it work. 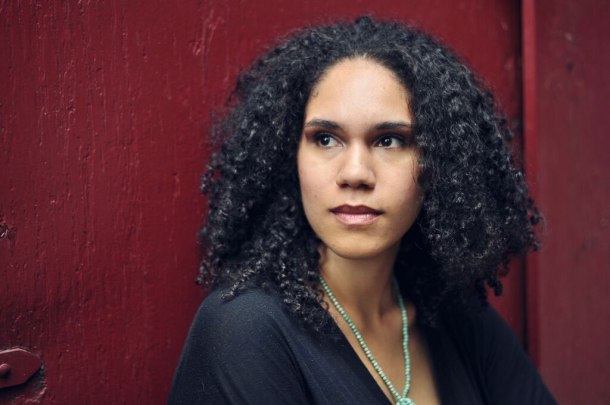 The concert opened with Jessie Montgomery’s Starburst, played in the original all-string orchestration. It was an appropriately optimistic and accessible curtain-raiser for the evening. The roughly three-minute bon mot swirls and scampers, with Mr. Dudamel emphasizing the piece’s more angular aspects while letting its melodic nature speak for itself.

The Adagio for Strings by Samuel Barber is often used as a requiem, perhaps most famously when the National Symphony Orchestra performed it in memoriam after President John F. Kennedy’s assassination. Mr. Dudamel and the LA Phil played it this night to honor everyone who lost their lives to Covid-19. The evening’s challenging environment combined with the reduced size of the orchestra lessened some of its dramatic impact. Over-eager applause at the work’s most dramatic moment didn’t help. Nonetheless, it was an effective interpretation and an earnest performance, made more poignant by the occasional chirping of birds heard during the broadcast.

Beethoven’s “Eroica” Symphony was the grand gesture meant to honor the heroes in healthcare and other critical roles who put themselves at great personal risk during the worst parts of the pandemic. It was an obvious choice, and it worked, even if the smaller orchestra offered a leaner sound than one usually expects. 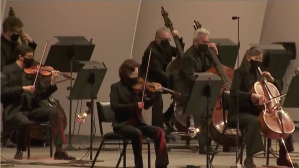 Mr. Dudamel took the opening movement at a healthy tempo, propulsive while still giving it adequate room to breath. The slow second movement trudged along dutifullyn (though I blame the composer much more than the conductor for being typically nonplussed about it). In contrast, the third and fourth movements were easy to like, wonderfully sprightly and majestic in turn. Mr. Dudamel shaped the entire symphony nicely, the whole feeling like more than the sum of its parts.

The orchestra’s performance throughout the evening was admirable, particularly given that the conditions were far from ideal. The wide safe spaces between the musicians must have made it difficult for them to hear each other, yet their cohesiveness largely remained intact, particularly during the first two works which exclusively featured strings. There were occasional moments during the Beethoven when entrances and cut-offs between strings, woodwinds, and brass were not as tidy as you’d typically expect from this world-class orchestra; however, given that woodwind pairs were arranged diagonally instead of side-by-side (or at least it looked that way on the video), the horns had their backs against the rear wall, and Principal Trumpet Tom Hooten was positioned in the back corner, I’m surprised the ensemble playing was as good as it was.

When sitting in the audience at the Bowl, I’m always cautious about commenting on the sound quality of the performances being filtered through the amphitheatre’s sound system. That caution is heightened when dealing with a broadcast coming out of my home theatre speakers. That said, I was quite impressed with the quality of the audio. The YouTube livestream was being processed by my A/V receiver in basic Dolby Surround, yet presented a clear soundstage and decent imaging featuring generous sound. Strings were more lush throughout the broadcast than would be expected from their reduced numbers. During the Beethoven, woodwind nuances came through in rich detail, the brass sounded resplendent, and Joe Pereira’s timpani playing was colorful without ever being boomy. The most tasty moments came during the Eroica with the horns (Andrew Bain, Gregory Roosa, and Amy Jo Rhine) in the third movement and Denis Bouriakov’s flute in the fourth movement. 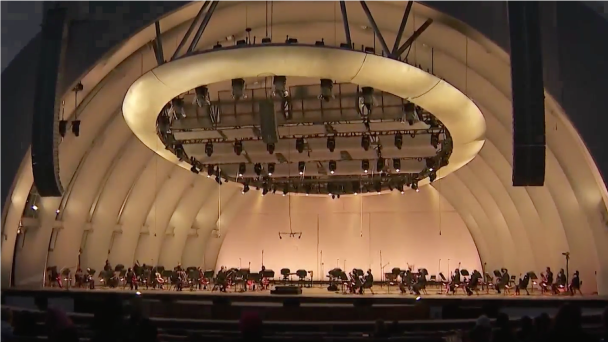 The camera work was surprisingly good. Most of the time, musicians shown on screen would actually be the one playing a noteworthy melodic phrase. This isn’t always the case for the big screens at the Bowl or even the LA Phil’s “Sound/Stage” performances recorded earlier in the pandemic (case in point: the video of the gorgeously played Rhapsody in Blue had a strange aversion for showing any brass players). However, the livestreamed images were not necessarily the same as what was shown to the live audience: during one wide shot showing the entire Hollywood Bowl stage and shell, the big screens seemed to show a close-up of Mr. Dudamel conducting.

The specific attributes of the audio and video mattered little to the audience. They cheered enthusiastically at every chance. The waltz from Bernstein’s Divertimento was played as an encore, and served as a dainty palate cleanser to send them home pleasantly into the night. 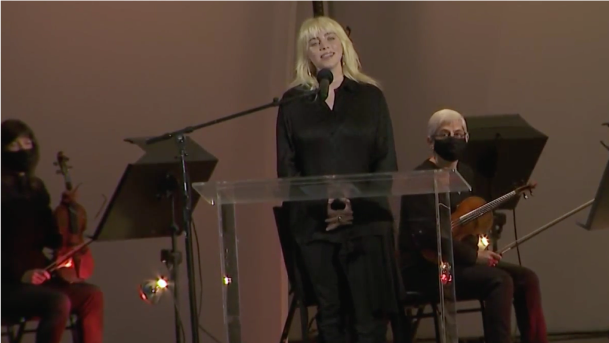