Gustavo Dudamel and the Los Angeles Philharmonic returned to the Hollywood Bowl this past Thursday, their first subscription concert since pandemic restrictions had been instituted and subsequently lifted.

There was a paying audience in the seats, none of whom were required to wear masks or to socially distance.  Ditto for the orchestra members on stage, who were wearing their usual summer whites instead of the winter blacks they wore for the free concerts a few weeks ago.  And unlike those earlier Bowl concerts, they played the Star-Spangled Banner at the opening, and the crowd enthusiastically sang along.

There was an overwhelming giddiness to the normality of it all, tempered with the knowledge that Covid-19 infection rates have been on the rise and that Los Angeles County was reinstituting an indoor mask mandate to take effect two days later.

This only increased the desire, if not the need, to enjoy and appreciate this concert in a way that pre-pandemic audiences couldn’t.  This crowd seemed determined to live in the moment. Most watched and listened directly, without needing to view and record the performance with their phones, taking in the music with the knowledge/trepidation/fear that it could all be taken away again.

Luckily for everyone in attendance, what happened on stage was worthy of the moment.

Works by Prokofiev opened and closed the night.  His “Classical” Symphony No. 1 was the first and most conventional concert work for the evening.

Dudamel and the LA Phil had played it a few weeks prior, opening the 2nd of their free concerts benefiting front-line workers.  That performance was fine, though the reduced forces were hampered by having to play extremely far apart from each other.  Occasional frayed edges could be heard, exacerbated by harsh amplification.

None of that was an issue this time.  A typically sized orchestral contingent put the work through its paces, making the symphony’s four movements-worth of challenges sound much easier than it actually was.  Mr. Dudamel took it all at a casual pace, seemingly content to emphasize the works “classical” elements over its thornier, more modernist leanings.

After intermission was Peter and the Wolf, with Viola Davis bringing star power to the narrator’s duties.  This was music originally written for children, and her unabashedly theatrical and joyous delivery embraced that intent wholeheartedly.  Laughter abounded throughout.

Yet while a children’s tale serves as the basis of the score, there was nothing juvenile about the music-making.  The orchestra sounded solid, led by first-chairs Marion Arthur Kuszyk (oboe) as the Duck, Boris Allakhverdyan (clarinet) as the Cat, Whitney Crockett (bassoon) as the Grandfather, and particularly Catherine Ransom Karoly (flute) playing the fiendishly difficult part of the Bird.

As much of a rare treat as it was to have a children’s concert mainstay played at a subscription concert, the two central works of the evening were rarer still.

The composer was a Chicago native, admitted to Northwestern University at the still-tender age of sixteen to study piano and composition. She earned a Bachelor and Master of Music in quick succession in 1933 and 1934 despite enduring what she called a “terribly prejudiced” environment.  While still in graduate school, she became the first African American piano soloist with the Chicago Symphony.

Her greatest inspiration was Langston Hughes and his poetry, so much so that after graduating from Northwestern, she’d move to New York to have a closer connection with him.  His writing would become the foundation of much of her work. She’d cite the importance of The Negro Speaks of Rivers in helping her get through the worst of her college years, and would eventually set the words to music for voice and piano.  They’d become lifelong friends, and his death in 1967 was the likely catalyst to her leaving New York for LA.

Montgomery Variations comes from the apex of her time in Hughes’s sphere.  It was written on the heels of the Montgomery Bus Boycotts and the 1963 bombing of the Sixteenth Street Baptist Church in Birmingham.  It consists of seven programmatic variations on the spiritual, “I Want Jesus to Walk With Me,” and is dedicated to Martin Luther King Jr.

That Montgomery Variations is being played at all is noteworthy, not just for activists cheering the appearance of a black female composer on such a program.  Ms. Bonds did not catalog her works with any rigor, and only a small percentage of her scores exist today, many in manuscript form spread across both coasts and places in between, and she died without a will.  Her husband and daughter tried to find and assemble what they could, including some papers discovered next to a nearby dumpster.  Her daughter would eventually die intestate as well, and she had no heirs; therefore, it’s not clear who holds the copyrights to her music, making public performances fraught with legal complexities.

Thankfully, the LA Phil was willing to take on the challenges, playing four of the seven movements on this night.

The music is direct in language and impact.  There is none of the gnarled, atonal, overly-analytical approach which was de rigueur among academic and orchestral circles at the time, particularly in Europe.  Instead, this is blatantly populist writing, unafraid to be melodic in style or cinematic in scope, yet finely crafted in its use of color and texture.

The opening movement, “Decision,” is ominous yet noble.  “March” opens with a bassoon solo (evocatively played by Mr. Crockett) that morphs into the full orchestra taking on a purposeful and determined melody, easily reminiscent of the Scherzo from Dvorak’s “New World” Symphony without plagiarizing it.  “Dawn in Dixie” exudes a bucolic feel, a touch wistful and melancholy.  The finale, “Benediction,” is cathartic and grand.

Throughout it all, the LA Phil gave it the kind of attention to detail you’d expect from an orchestral warhorse.  Mr. Dudamel allowed the music to bloom, celebrating its beauties without wallowing in them. It was meaningful even if the work is not a masterpiece.

More of Ms. Bonds’s music will be played at the Bowl this season, her songs juxtaposed with those of George Gershwin as part of a concert celebrating Broadway and Americana.  Thomas Wilkins conducts the orchestra, with soprano Julia Bullock as the featured soloist.  Put the September 2nd concert on your calendar now.

After Montgomery Variations, conductor and orchestra played another tribute to Dr. King, this time the “Martin Luther King” section of Three Black Kings by Duke Ellington.

If ever an American composer deserves to be spoken of in the same breath as any of the great European musical innovators, let it be The Duke.  His contributions expanded upon jazz to create melodies, harmonies, and timbres that were both unique and long lasting in absolute terms, transcending any specific genre.

In this case, the orchestra played an arrangement by famed jazz trumpeter and composer Terence Blanchard.  The music is like a leisurely stroll, happy and confident, easily bringing smiles to musician and audience members alike.  Peter Erskine played the prominent drum set part with elegant restraint. 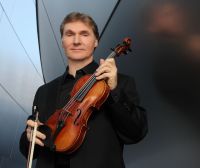 The orchestra had played it mid-pandemic without an audience, part of its “Icons on Inspiration” online series.  Present in that performance yet missing from this one was section violinist Guido Lamell.  The four decade-long veteran of the orchestra, originally appointed by Carlo Maria Giulini, had suffered a heart attack and died just two days before.  Mr. Dudamel and the musicians dedicated this performance to his memory.  It was a touching tribute.