Yesterday afternoon, the good folks at Los Angeles Opera opened up their doors to the media for a behind-the-scenes peek at preparations for their season opening production of Bizet’s Carmen.

Christopher Koelsch (President and CEO) gave a brief welcome before Rupert Hemmings (Senior Director, Production) led us onto the stage of the Dorothy Chandler Pavilion to watch tenor Brandon Jovanovich (Don Jose) and bass-baritone Ildebrando D’Arcangelo (Escamillo) discuss and walk through their Act 3 knife fight. Mr. Hemmings then led us backstage, pointing out interesting details and tidbits about this production (purchased from the Teatro Real, Madrid and being used here for the third time). Of note: it is one of the largest sets utilized by LA Opera, extending almost 60 feet deep. It was also interesting to see the attention to detail paid to many of the props: a poster advertising Escamillo’s bullfight, pottery with faux nicks and chips, and many other small things that people in the audience would be hard-pressed to actually see.

There was then a brief Q&A with Plácido Domingo, LA Opera General Director and conductor for most of the run of this Carmen. Among the highlights:

Finally, Mr. Domingo stepped onto the podium in the orchestra pit. He began with quick run-throughs of “The Star-Spangled Banner” and the Carmen overture before finally rehearsing Act 3.  As with any rehearsal, he keyed on specific things that were important to him:

While the performers did their thing, the rest of the crew worked away:   technical issues were being addressed, sets were touched up, and costumes refined.

Throughout it all, we got unhindered access to the proceedings, even being allowed to take photos and video of whatever we wanted.  Below are some of the shots I took, and on my Instagram page are a few video snippets:

I’ll be back at the Dorothy Chandler Pavilion this Thursday to live tweet the final dress rehearsal and then again on Saturday, Sept 21, to review opening night.

(NOTE:  As is usually the case, the thumbnails below may not all show up if you use Google Chrome as your browser.  If this is the case, select one of the thumbnails you actually can see, then scroll through each of the pictures and all of them can be seen.) 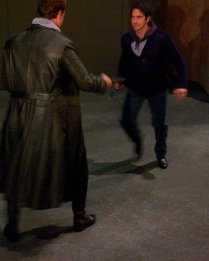 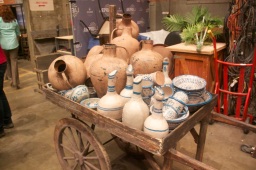 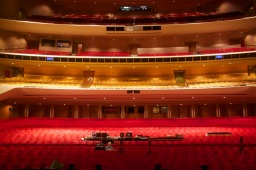