If I were to look up “diva” in the dictionary, I’d half expect to see one of the definitions — maybe THE definition — to be “Floria Tosca.”  The character after which Puccini named his famous opera has all the attributes that would come to mind when I think of a diva:  petulant but passionate, jealous but loving, a general pain in the ass but someone you’d definitely want on your side in a fight, and most importantly, a singer with the grandest of voices.

Because of that, a successful production of Tosca (the opera) requires a dramatic soprano as Tosca (the character) who is willing to be AND is capable of  being the ultimate diva on stage.  I firmly believe that more than any of the other female leads in Puccini’s most famous operas —  Mimi (La Boheme), Turandot, or even Butterfly — Floria Tosca needs to be grandiose or the whole show will fall flat.

Sondra Radvanovsky is that kind of Floria Tosca in all the best ways.  As evidenced last Saturday night during the opening performance of Los Angeles Opera’s six show run, Ms. Radvanovsky had both dramatic flair and subtlety, matched by stunning vocal chops.  She easily covered the full range of emotion and expression this demanding role calls for:  I believed that she loved Cavaradossi; I believed that she was intensely suspicious and jealous that he may have been cheating on her; I believed that she was a reluctant murderer, but a determined one once she set her mind to it; that she was naive enough to think the execution was a fake, and crazy enough to kill herself.  I bought it all, hook, line, and sinker.

It was awe-inspiring to watch and listen to Ms. Radvanovsky in all three acts, but if all you experienced was her rendition of “Vissi d’arte,” you’d probably still walk away with the same impression.  This one aria was a microcosm of her whole performance:  sad, anguished, powerful, a touch melancholy; and just when you thought you couldn’t ask for much more, she floated the final note for what seemed like an eternity, adding a little crescendo, then decrescendo, then back and forth again, injecting an extra touch of anxiousness and despair.  It was breathtaking.

She got perfect support from conductor Plácido Domingo.  LA Opera’s General Director certainly knows his way around this score, and on this night, his conducting was as effective as I’d ever experienced.  While he mostly went for an unabashedly big sound from the orchestra, he knew when to turn the heat down, when to push and when to ease up. 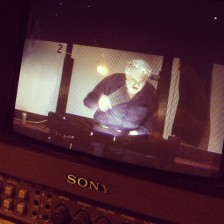 The orchestra responded enthusiastically, giving Mr. Domingo that big sound while never letting textures get thick and gloppy.  The solo clarinet work in Act 3 was particularly beautiful, with just the right amount of tension and rubato.

Director John Caird wasn’t afraid to add his own over-the-top touches, mainly with blood, more blood, and even more blood spurting out to and fro.  Beyond the special effects, he knew when to keep the action compact and when to go big.  He made dramatic use of the space on stage, both horizontally and vertically:  during the first act, all three main characters sang their way up and down the three levels of the scaffolding which supported Cavaradossi’s giant painting; the third act begins with an already dead Angelotti being hoisted up to the high ceiling courtesy of one of the multiple nooses hanging down.    He also added a mysterious young girl into the action; whether the symbolism was eerie, heavy-handed, or just silly is debatable, but it was just one more thing that kept things from being ordinary.

The combined contributions of those three — Ms. Radvanovsky, and Messrs. Domingo and Caird — easily make this production  worth seeing. Everyone and everything else was good enough to not get in the way of one’s enjoyment. 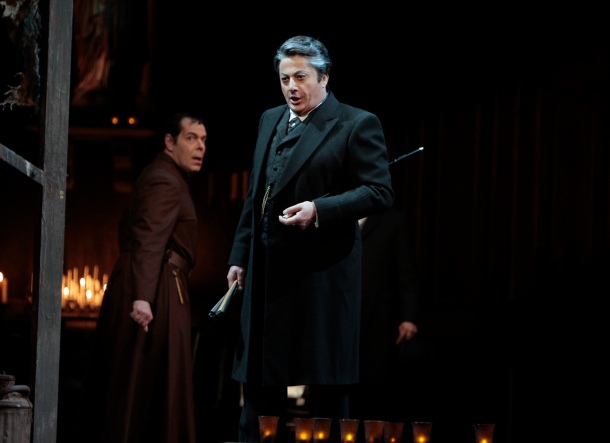 The two male leads couldn’t quite match Ms. Radvanovsky’s brilliance, but for opposite reasons:

The rest of the cast handled their smaller roles with aplomb.  Joshua Bloom was an appropriately desperate Angelotti. Philip Cokorinos was a resonant Sacristan. Rodell Rosel did a nice job vocally and dramatically as the constantly put-upon Spoletta.  Daniel Armstrong handled Sciarrone without problem, and Eden McCoy was smooth as the Young Girl.  The singers of the Los Angeles Opera Chorus and Los Angeles Children’s Chorus sounded great and added some atmosphere to the on-stage proceedings.  The various other non-singing cast members and supernumeraries seemed completely integral to the action on stage.

The sets and costumes, courtesy of Houston Grand Opera, seemed to place the action in the WWII era  rather than the original setting of pre-republican Italy.  It was grand in scale and full of detail, working reasonably well overall; however, it was not without its own quirks:

All that said, the benefits of this Tosca easily outweigh its deficiencies.  Go to experience the artistry of Sondra Radvanovsky, and you’ll be pleasantly appreciative when a nice production of a Puccini classic breaks out around her.

Lado Ataneli (Scarpia) on platform, with ensemble (finale of Act 1)

by Giacomo Puccini
Libretto by Luigi Illica and Giuseppe Giacosa

One thought on “Appealingly over the top: Sondra Radvanovsky is an ideal Tosca for LA Opera, with ample support from Domingo and Caird”