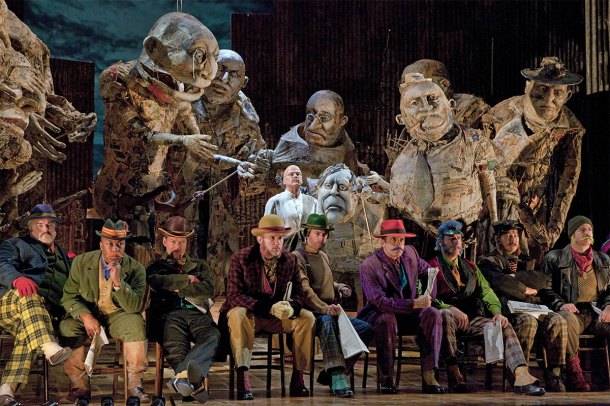 Los Angeles Opera and Plácido Domingo, their General Director, issued a press release last week announcing details of their 2018/19 (full details are below).  In short, here’s what we’ve got to look forward to:

My first reaction? I’m “whelmed” — neither overwhelmed or underwhelmed — so I’ll grade it as a “C” on an absolute scale, and a “C+/B-” if I’m grading on a curve (compared to LA Opera’s recent history).  At a minimum, it’s definitely an improvement over the current 2017/18 season, thank goodness.

There are many things to like when you get up close.    I’m happy to see that a long-ignored Mozart opera is finally getting performed and that a work by a living composer makes it to the Dorothy Chandler Pavilion.  They’re presenting interesting works in their Off Grand series.  Cast lists are more compelling in general, and Mr. Domingo himself is appearing in two different productions. Bravi for all that.

And yet, at a 30,000 foot view, it still looks like an opera company that is painfully cautious. It’s worthwhile to recall that back in 2011, the Los Angeles Times described a conversation with Mr. Domingo where he mentioned that “the company ‘has to be careful’ financially going forward but added that he would like to see a return to as many as eight productions by the 2012-13 season.” . . . Yeah, not so much.

Instead, Mr. Domingo et al are seemingly content with an “if the minimum weren’t good enough, it wouldn’t be the minimum” kind of status quo, and satisfied with smaller achievements when others around them — from the juggernaut of the Los Angeles Philharmonic, to the nimble Los Angeles Master Chorale, the always adventurous Long Beach Opera, and the creative and convention-defying work by The Industry —  have turned boldness into the new normal.

Yes, LA Opera is taking steps forward.  It’s just that everyone else is moving leaps and bounds ahead in both quantity and quality, and making LA Opera seem more pedestrian every year by comparison.

Still, it can be worse — it has been worse.  We’ll take what we can get for now and pray that the company keeps moving in the right direction.

Here’s an analysis of the season: